Radar remote sensing is an ideal instrument for monitoring the ocean continuously as it is independent from daylight and weather. Several different types of radar systems are in use at the Helmholtz-Zentrum Hereon, Institute of Coastal Research. They are operated from a variety of platforms: Space-borne, coastal, vessel-mounted, as well as offshore.

These systems allow us to monitor ocean surface winds, waves and ocean current patterns at spatial scales ranging from meters to hundreds of kilometers. Radar measurements utilize the backscatter from the ocean surface due to its roughness at scales of electromagnetic wave lengths used by the radar. As surface roughness is strongly related to surface winds, waves and currents, these parameters can be retrieved from the radar measurements. 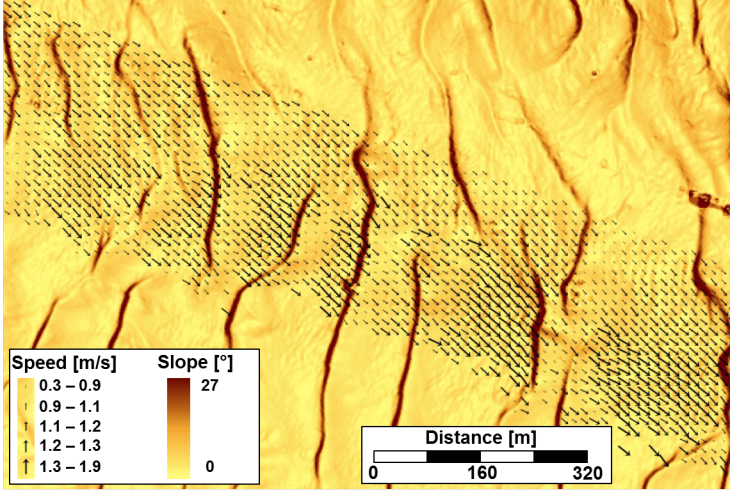 A high-resolution current field measured by the Radar Doppler Current Profiler off the isle of Sylt. The underlying bathymetry map was produced using data from a multi beam echosounder. -image: Hereon-

Ground based microwave radars (X-band, 9.4 GHz) are used to observe the ocean surface at short distances (< 2 km) at high spatial and temporal resolution. These systems measure the surface roughness, which can be used to retrieve surface winds, waves, and current information as well as bathymetry in shallow water areas. 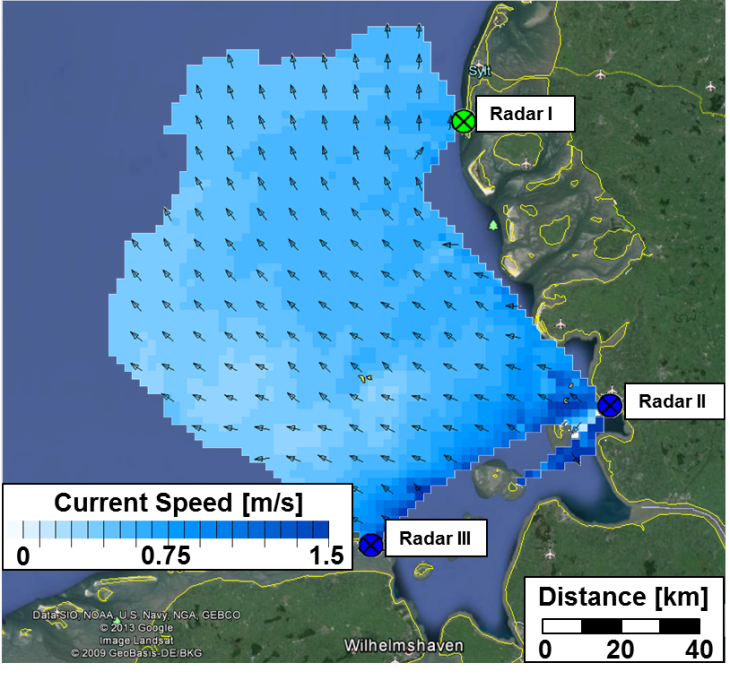 Current field retrieved from HF-radar for 5 January 2014 at 4:19 UTC in the German Bight. -image: Hereon-

In contrast to the X-band, waves in the high frequency (HF) band (3-30 MHz) propagate along the air-sea interface. This allows the signal to sense the ocean behind the horizon enabling coverage of more than 150 km with a coarse spatial resolution. As part of COSYNA, three HF-radar stations along the German North Sea coast are operated acquiring data on a pre-operational basis. Every 20 minutes the radar data are converted in near real time to wave and current fields at a spatial resolution of 2 km.

For larger scale observations, Hereon has developed algorithms to retrieve high-resolution surface winds from satellite-borne synthetic aperture radar. The resulting wind maps give an instantaneous view of an up to 500 km wide swath along the orbit of the satellite with a resolution as fine as 100 m.