Scientists at the Helmholtz-Zentrum Geesthacht - Center for Materials and Coastal Research (HZG) and the Hamburg University of Technology are collaborating with Airbus to develop an overall concept for the aviation of the future. The project is called "Green Operation for Future Aviation" and is funded by the City of Hamburg with almost 1.4 million euros. The aim is to supply a production site with hydrogen cost-effectively and efficiently, using the Airbus site in Hamburg-Finkenwerder as an example.

Joint press release of Helmholtz-Zentrum Geesthacht, the Hamburg University of Technology, the Hamburg Ministry of Economics and Innovation and Airbus. 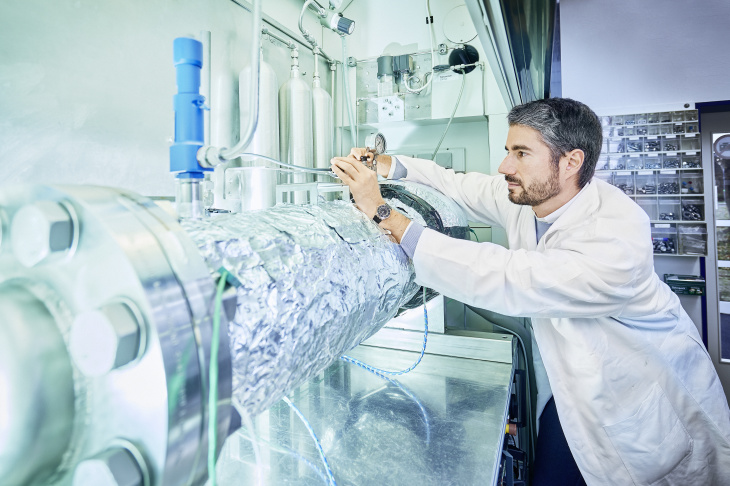 The scientists in Geesthacht are researching, among other areas, efficient and compact storage options for hydrogen at low pressures and surrounding temperatures, as here in this metal hydride storage tank. Photo: HZG/Christian Schmid

German climate policy aims to reduce emissions of greenhouse gases such as CO2 by 80 to 95 percent by 2050 compared with 1990 levels. Until then, there are many intermediate targets. To achieve them, fossil fuels must be gradually replaced. Essential to this is the conversion of the transport sector in all areas - aviation, shipping and road traffic. Hydrogen, a green energy carrier, is one of the essential building blocks and will significantly change Hamburg's role as a center of aviation, starting with the qualification of hydrogen systems and fuel cell technology and ending with the construction of aircraft whose energy supply could run on hydrogen in the future. The aviation group Airbus aims to put the first hydrogen-powered passenger aircraft into commercial service by 2035. For the market launch of hydrogen aircraft, the possibility of refueling must be tested accordingly at an early stage, as well as the implementation in the factory premises must be established. " In the project 'Green Operation of Future Aviation', we will address the questions: How can the supply of hydrogen for the production site be realized efficiently and economically in order to achieve a significant reduction in greenhouse gas emissions? How can new products and applications be supplied with hydrogen at the plant?" explains Professor Thomas Klassen, coordinator of the project and head of the HZG Institute of Hydrogen Technology.

The aim of the "Green Operation of Future Aviation" project is to develop a concept for a cost-effective and efficient hydrogen infrastructure using the example of the Airbus site in Hamburg-Finkenwerder. This will be scientifically elaborated by the Institute of Hydrogen Technology of HZG and the Institute of Environmental Technology and Energy Economics (IUE) of Hamburg University of Technology and then economically evaluated. Airbus itself is providing the necessary data. The project is being financed by the City of Hamburg, specifically the Ministry of Economics and Innovation, with just under 1.4 million euros. Hamburg Senator for Economics and Innovation Michael Westhagemann: "As the world's third-largest civil aviation location, we are doing everything we can to make the industry more sustainable and environmentally compatible. In this way, we want to help achieve the climate targets and at the same time emerge from the crisis stronger and more innovative. There is no question in my mind that hydrogen will play a key role in this. It will have to be clarified in which areas exactly hydrogen can be used most sensibly - be it in production, in refueling in the form of liquid hydrogen to operate cabin electronics or engines, or to supply the plant halls. At the end of the project, we will have answers to these questions and be one step closer to the goal of zero-emission aviation." The project will run for two years and end at the end of September 2022. 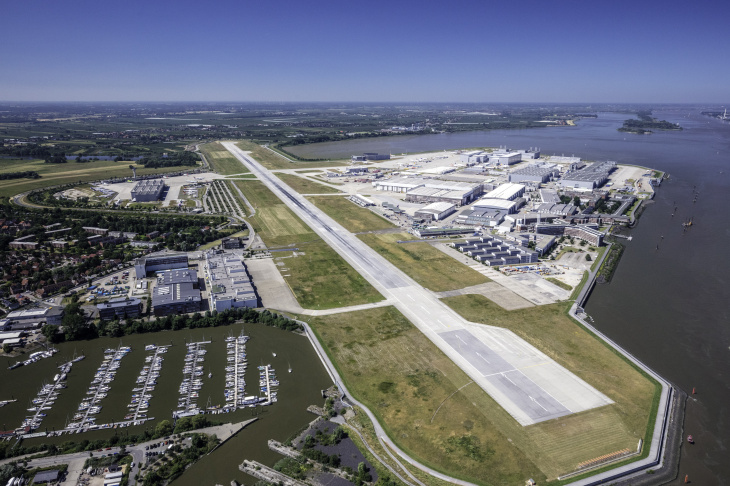 In the "Green Operation of Future Aviation" project, the HZG, Hamburg University of Technology and Airbus are developing a concept for the cost-effective and efficient supply of hydrogen to the Hamburg-Finkenwerder production site. Photo: Airbus

"Hydrogen will not only play a key role in the operation of aircraft in the future. The technology is also very promising across sectors as an energy carrier for industry and mobility on the ground. For decades, we have had close partnerships with universities and research institutes in Hamburg. We are therefore very pleased that this cooperation is now being expanded even further in the future technology of hydrogen utilization," says Dr. André Walter, Chairman of the Board of Management of Airbus Commercial in Germany and head of the Hamburg site.

For the concept based on the example of the Hamburg-Finkenwerder plant, the team will first prepare a site analysis and investigate in which applications hydrogen can be used advantageously - apart from aircraft refueling. It will also analyze how the demand for hydrogen could develop in the coming years. Subsequently, the different options for the supply of hydrogen, which will certainly change considerably over the coming years, will be analyzed. Own local production, offtake from regional hydrogen sources, national supply and import of hydrogen, for example from Southern Europe, North Africa (Tunisia) and Australia, are considered. In addition, different storage options are examined. "A model based on all these factors enables the optimization of the entire hydrogen supply, including use, in terms of costs, energy efficiency and emissions - taking into account the respective dependencies and expected development over time," summarizes Prof. Martin Kaltschmitt, head of the Institute for Environmental Technology and Energy Economics at TU Hamburg.

The results will be used to derive a long-term overall concept for the development and expansion of hydrogen supply and use at the Airbus plant in Finkenwerder, which can serve as the basis for investment decisions at the site. "Subsequently, the concept developed can be used as a starting point for the development of airport supply infrastructures or even for plants that manufacture vehicles and ships," says Thomas Klassen.