Nitrogen compounds are an important factor in the production of algal biomass. The team led by biologist Kirstin Dähnke from the Institute of Coastal Research at the Helmholtz-Zentrum Geesthacht has been carrying out extensive Elbe nitrogen measurements for this reason. 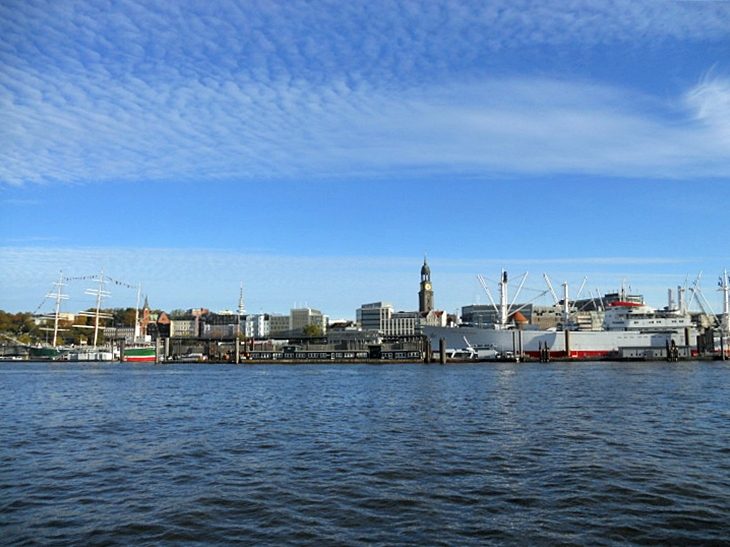 Nitrogen input from regions upstream from Hamburg that are heavily influenced by agriculture affect the Hamburg Harbour and the Elbe’s estuary. Photo: HZG/Annika Eisele

Nitrogen compounds are an important factor in the production of algal biomass. The team led by biologist Kirstin Dähnke from the Institute of Coastal Research at the Helmholtz-Zentrum Geesthacht has been carrying out extensive Elbe nitrogen measurements for this reason.

These measurements have shown that regions upstream from Hamburg that are heavily influenced by agriculture are responsible for most of the nitrogen input in the Elbe today. This affects the area down to Hamburg Harbour and to the mouth of the Elbe. To reduce the eutrophication in the North Sea in the future, measures must be taken upstream.

Nitrogen is an important plant nutrient. Plants need it to build amino acids, which are the building blocks of proteins and therefore the basis for all life. The more nitrogen available to plants, the better they grow. This applies both to plants on land as well as to algae in the sea and fresh water. A problem can arise if excessive amounts of nitrogen compounds are present; this can lead to an excess of algae growth and the formation of algal blooms. When these algae die, they sink below, where they are processed by bacteria. The problem is that the bacteria consume oxygen. If too much algae are present, the bacteria are very active, whereby a great deal of oxygen is consumed. This can lead to an oxygen deficiency in the water. In these areas, higher organisms—such as fish, crabs and mussels—will die.

“To assess the state of rivers or estuaries, it is important to determine how high the nitrogen compound levels are,” says biologist Kirstin Dähnke from the Institute of Coastal Research at the HZG. "In addition, we want to understand where the nitrogen compounds originate.” The biologist carries out analyses in her Helmholtz emerging scientists group at the HZG. Together with her colleagues, she recently studied the Elbe in particular and took samples at several locations along the river, from the weir in Geesthacht to Hamburg Harbour and to the mouth of the North Sea. The samples were then studied in the laboratory for different nitrogen compounds.

Nitrogen in a Constant Cycle

Nitrogen is an interesting chemical element because it is present in nature in different chemical compounds and is converted again and again by bacteria and plants in a cycle, transforming from one form to another. The atmosphere is approximately seventy-eight percent nitrogen, which is designated by the chemical symbol N2. Nitrogen is therefore very common. Most plants, however, cannot use pure nitrogen. They depend on bacteria to convert atmospheric nitrogen in several steps into ammonium, then to nitrite and finally to nitrate, which can then be used by plants. This conversion from ammonium to nitrate is called nitrification. Nitrate, however, can be broken down by bacteria again to form pure nitrogen. This process is called denitrification. 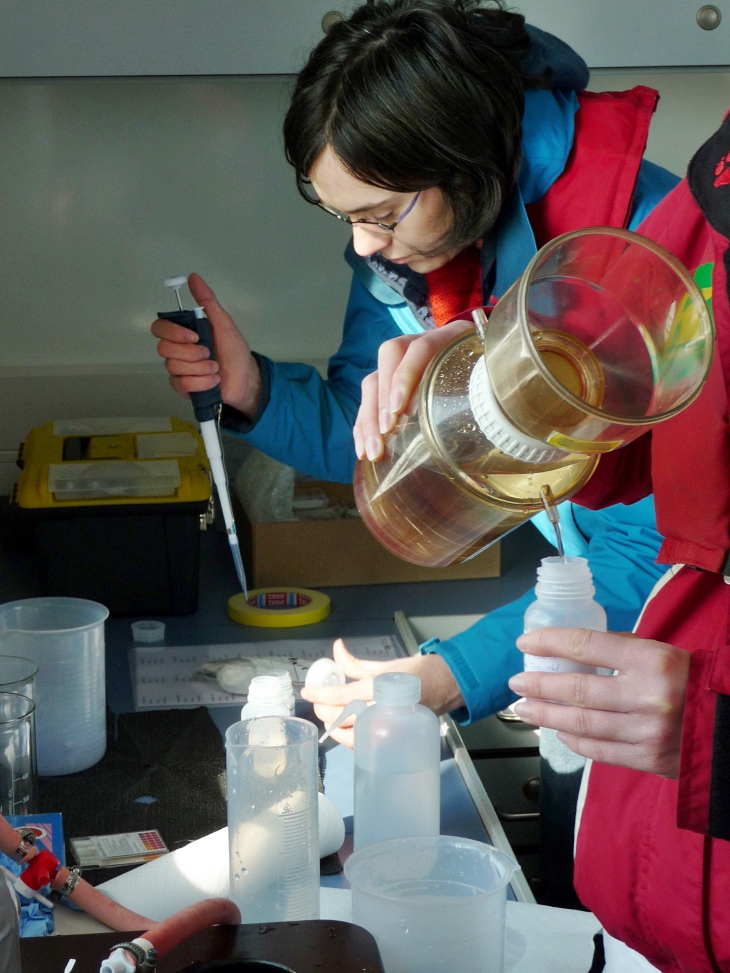 Today the nitrate content in nature is not only influenced by the natural interplay of bacteria and plants, but mainly by agriculture, which uses large amounts of ammonium fertiliser; this is converted into nitrate in the soil. A considerable portion of the nitrate is discharged into rivers with the rain, leading to strong algae growth. Kirstin Dähnke and her team have now uncovered how these nitrate quantities affect the Elbe.

They have determined that nitrate from agriculture upstream is immediately absorbed by algae and converted to biomass. The nitrate content in the water therefore remains moderate. The nitrate values in Hamburg Harbour, however, rise drastically. Dähnke and her team have discovered why: the water from the Elbe is heavily decelerated in Hamburg Harbour by many canals and port basins.

Small crabs and single-celled organisms can increasingly break down the algae in these calm areas. The animals consume a great deal of the algae, digest and then excrete them. “The biomass contained in the excrement particles is then broken down again by bacteria into ammonium.”

This means that a lot of ammonium is available in Hamburg Harbour’s water and it is then converted into nitrate by other bacteria via the process of nitrification," says Dähnke. Because oxygen is consumed by the reactions from ammonia to nitrite and then to nitrate, the oxygen content in Hamburg Harbour decreases to the same degree. The nitrification on average accounts for a quarter of the consumption of vital oxygen throughout the Elbe.

The water that leaves Hamburg Harbour carries so much nitrate that it can hardly be broken down to pure nitrogen again through denitrification. Relatively large quantities of nitrate therefore find their way into the North Sea where they can also contribute to algal blooms, especially in summer, and in turn cause an oxygen deficiency.

In order to show that the large quantities of nitrogen compounds, which ultimately cause the high nitrate values in Hamburg Harbour, actually originate from agriculture, Dähnke and her team must carry out complex water sample analyses. It is the nitrogen isotopes that play the leading role in these studies. Isotopes are those atoms of a chemical element that differ in the number of neutrons and therefore exhibit a different atomic mass. Nitrogen, for example, contains the isotopes 15N and 14N.

Because organisms preferentially absorb 14N in biological processes, the 15N gradually accumulates in fertilised fields; it is then washed away with the rain and deposited into the rivers. Algae correspondingly absorb 15N in the areas heavily used for agriculture upstream from Hamburg. Nitrate as well as nitrogen in the algae are thus richer in 15N in Hamburg Harbour. A considerable portion of this 15N-rich nitrate can be detected in the water samples when this biomass is broken down in Hamburg Harbour. ”We can therefore be quite certain that the high nitrate levels in Hamburg Harbour are actually caused by the nitrate input upstream,” says Dähnke. 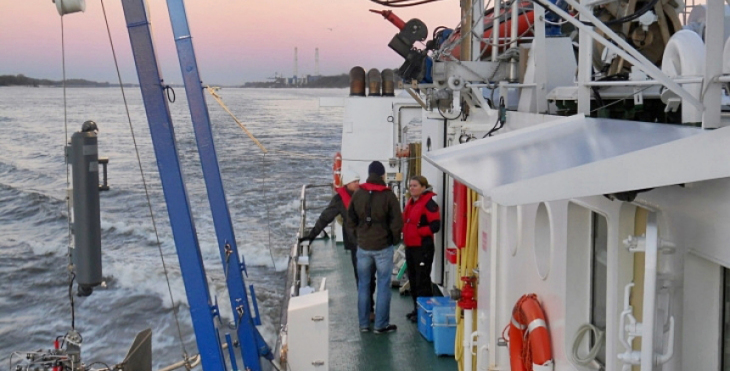 Scientists from the Institute of Coastal Research on board the research ship Ludwig Prandtl during a research cruise along the Elbe. Photo: HZG HZG/Kirstin Dähnke

The Origin of Nitrous Oxide

One would actually expect the levels to decrease, as the water quality in the Elbe has improved during this time. The reason for this is that nitrous oxide is released mainly during denitrification, the re-conversion of nitrate to atmospheric nitrogen. Nitrous oxide thereby arises during an intermediate chemical step. Denitrification takes place in sediments and water masses that are largely oxygen-free. The less oxygen the water contains, the heavier the denitrification and therefore the nitrous oxide production.

Oxygen content in the Elbe, however, has increased again in the last twenty years due to environmental measures such as the construction of sewage treatment plants. This should have actually led to a decrease in nitrous oxide. Kirstin Dähnke and her colleague, Lisa Brase, who has been heavily involved with the topic, assume therefore that nitrous oxide doesn’t increase through denitrification, but is created by another process: in an intermediate chemical step during nitrification – the conversion of ammonium to nitrate, which is intense in Hamburg Harbour.