United for a Climate-safe Future

How can different interests of use and protection in coastal regions be reconciled?

Coastal regions are among the most densely populated regions in the world. This leads to numerous conflicts regarding the use and protection of such regions. At the same time, many coastal areas are threatened by climate change. Therefore, in cooperation with her own teams and the local population, geographer Prof Beate Ratter develops solutions within projects and workshops - in East Frisia as well as in Namibia. One of the most vital aspects here is to understand each other so that coastal management and climate protection measures are ultimately supported by everyone. 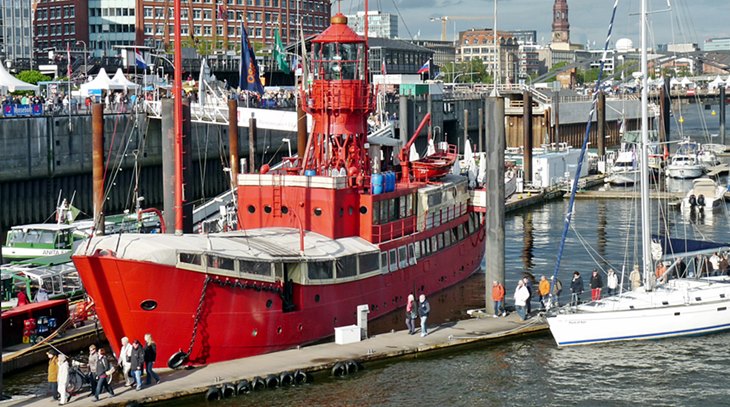 The global coasts are more densely populated than ever before. Coastal areas provide food, are crucial economic regions and are immensely vital for the global trade in goods – after all, shipping vessels convey more goods than any other mode of transport. The importance of the coastal regions is growing. In the year 2000, approximately 625 million people all over the world lived near the sea. Experts estimate - not least due to the growth of megacities near the coasts - that this population could reach 11.3 billion by the year 2060.

Extensive increase in coastal utilisation, however, is becoming a greater problem. More and more people must be supplied with food and drinking water. In many regions, the expanding of ports and cities is leading to environmental destruction. Added to this are the impacts of climate change - more frequent heavy storms together with sea level rise could lead to major flooding.

All of this taken together results in friction and conflict. To resolve such conflict, strong coastal management plans are necessary as well as input from experts who are in the position to bring together all stakeholders involved. One of those individuals is geographer Beate Ratter, professor of integrative geography at Hamburg University and department head of Human Dimensions of Coastal Areas at the Institute of Coastal Research at Helmholtz-Zentrum Geesthacht (HZG). Through her work she is always close to people. She conducts workshops in which stakeholders plan utilisation and protection measures for coastal regions together. She acts as a mediator when conflicts arise and, last but not least, she asks local residents what kind of future they imagine. 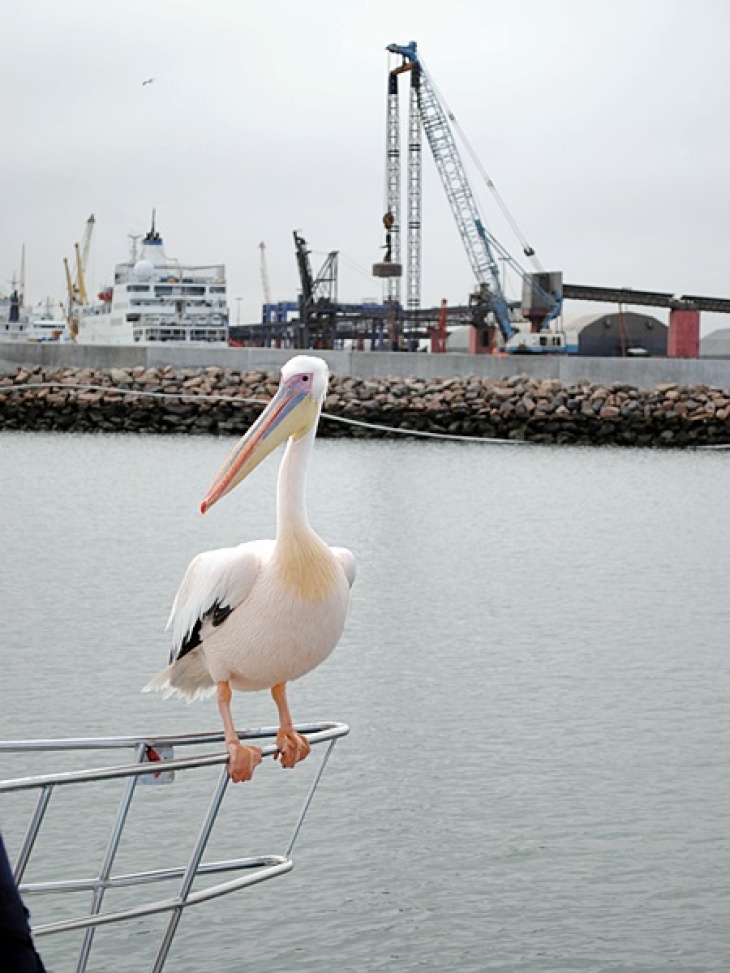 A project carried out in Namibia by Ratter’s working group shows how such a coastal development process could look. The aim there is to reconcile various utilisation interests, as the Namibian coast is becoming more intensively used. Because ocean currents in that area carry nutrient-rich water from the depths of the Atlantic to the surface, the species-rich waters are important for fishing and marine protection. But there are also rich phosphate deposits off the coast in the sea, which mineral companies want to excavate and process into fertiliser.

Fishers worry that the water will become polluted. In addition, the coast along the Namibian desert is a tourist magnet. Vacationers want to experience pristine, unspoiled nature here. “In order to resolve such a situation, it is important to understand people, to recognise the political and economic interests, the power relationships and the cultural characteristics,” says Ratter. That is always the first step. “And then what is required is openness and a great deal of time to build trust and mutual understanding.” It took five years until there was a coordinated marine spatial plan on the table with which all parties were satisfied. This plan is now at the governmental level, where it now needs to be implemented.

Recognising threats in all their complexity

Of global importance is the increasingly common question of how the coastal residents can prepare for a rise in sea level and what protection measures they should take in the different coastal regions. In this respect, Ratter’s work also focuses on climate change and climate protection. When diving deeper into these topics, as Ratter does, it becomes clear how complex the threats are.

This has been demonstrated by the EXTREMENESS project in East Frisia. Through a workshop process, for example, experts led by Ratter analysed how people in East Frisia can prepare for extreme weather events in the future. East Frisia is threatenend on two fronts. On the one hand, the dike line must be maintained to ward off heavy storm surges. 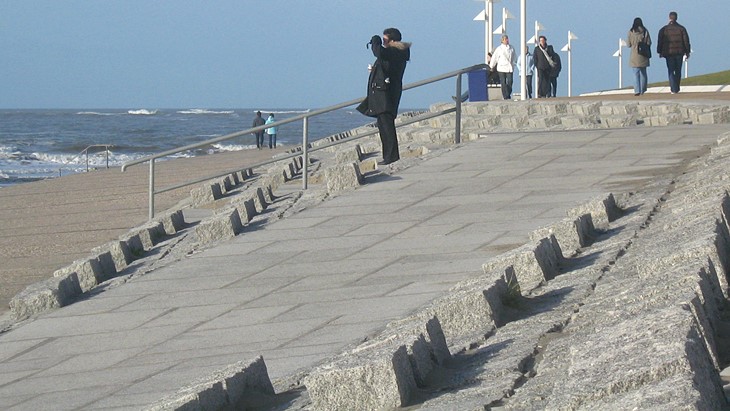 Massive revetment on the dike provides protection to the sea side during storm surges (Photo: Ina Frings)

As a significant part of East Frisia lies beneath sea level, there is an additional threat: heavy rains. During long periods of rainfall, East Frisia could fill up like a bathtub. Normally, pumping stations transport the water from the low-lying inland areas out into the North Sea. However, if there is a strong storm surge that pushes the water against the dikes, the water can no longer be transported away. With days of continuous rain, which could become more frequent with climate change, East Frisia would be full of water.

Ratter gathered many participants together for the workshops in East Frisia: representatives of the THW (Technical Relief Service), the fire department, the dike associations, the Chamber of Agriculture and even the Volkswagen plant in Emden. “First we asked the participants what they would actually consider an extreme situation,” she explains. “Here it became very quickly evident that everyone had their own vision.” For one party it was containers that broke away from ships during severe storms and tore holes in the dike. Others feared that the dikes could be soaked by several successive storm surges and rainfall. Others were afraid that rain water would flood the streets and railroad lines.

“It showed how complex the threats are,” says Ratter. She then passed on the findings from the survey to the system modelling scientists at the Helmholtz-Zentrum Geesthacht, who calculated on the computer three possible flooding scenarios for East Frisia – such as the failure of a lock during a storm surge. These scenarios were adopted by the city of Emden in one of its routine disaster control exercises. Now it was a question of reacting to the catastrophe in a simulation game – power outages, flooded railway lines, closed schools and supermarkets. Everything was played out. 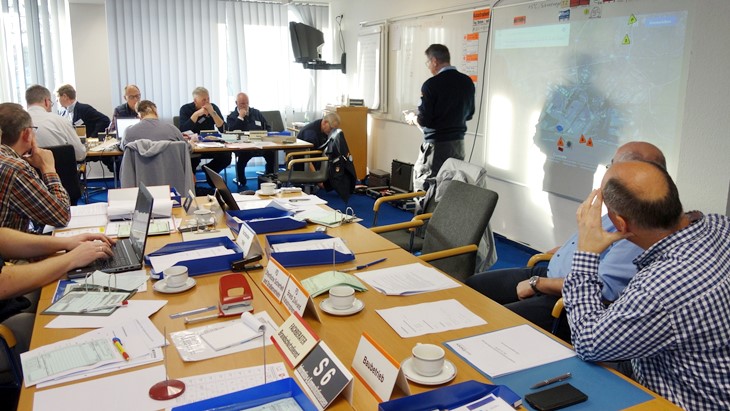 “An important insight from such a workshop process is that cascade effects exist – chain reactions, which the participants didn’t have in mind beforehand because in everyday life they usually only focus on their own realm of responsibility,” says Ratter. Thanks to the interdisciplinarity, the workshops provided a bird’s eye view. “You can only learn real problem-solving skills through mutual exchange and in simulated practice.” One result of the workshops and the EXTREMENESS project was that the fire department in East Frisia now wants to revise their disaster plans in cooperation with the researchers of Helmholtz-Zentrum Geesthacht.

“Danger recognised, danger averted,” as old wisdom says. Beate Ratter has also learned in recent years that humans do not always behave rationally - when it comes to recognizing risks and undertaking countermeasures. “Society is a non-linear, dynamic system that is culturally embedded in experience - unfortunately, it doesn’t always behave rationally,” she says. “If, for example, economic or political interests stand in the way, then people don’t always choose the correct solution, but rather the politically motivated one when in doubt. Scientists often think that merely more facts and more knowledge are needed to help people make the right decisions - but that’s unfortunately not always the case.“

The DICES project, for which Ratter together with coastal protection engineers travelled to the Maldives several times between 2016 and 2019 to analyse the situation and conduct interviews, showed how difficult the path to climate-safe coastal protection can sometimes be. For example, whether natural materials such as coconut fibres or bamboo can be used to produce cost-effective coastal protection should be examined. 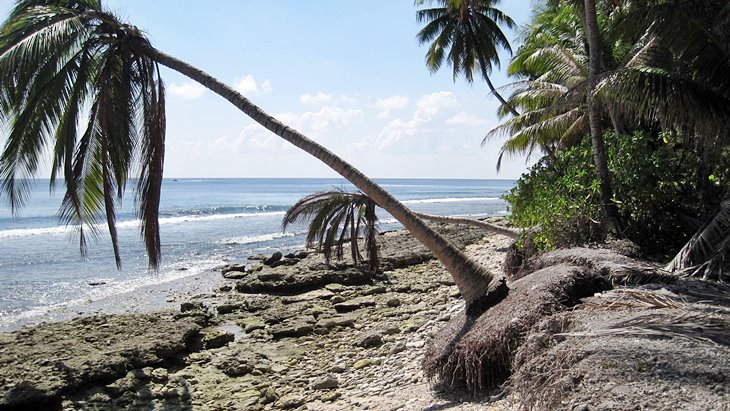 The process, however, was difficult. Ratter and her colleagues recognised that coastal erosion there is caused not only by sea level rise but also by flawed decisions. Due to the construction of a harbour, for example, currents have shifted, causing the sea to massively carry away sand from the coast. "They could have built the port in another location, but national politics decided otherwise and the local inhabitants must now bear the consequences,” says Ratter. When governments make decisions without including the local population in the process, it will be extremely difficult to develop coastal protections that everyone supports.

Beate Ratter is very active internationally - mainly in Hamburg University projects. For example, she contributed to the IPCC Special Report “Ocean and Cryosphere” and lent her expertise as a lead author to the chapter on "Extremes, Abrupt Changes and Managing Risks.”

She is also, however, interested in climate change that is taking place on our front doorstep in Germany. She has, for example, contributed for several years to the REKLIM Initiative (Regional Climate Change) in which the nine Helmholtz Association research centres explore the regional impacts of climate change. What is special about this initiative is that scientists from different disciplines are brought together who normally wouldn’t work with one another. This results in entirely new insights.

Ratter’s team supported the climate-fit project for REKLIM, which the REKLIM headquarters at the Alfred Wegener Institute has organised together with the environmental foundation WWF and adult education centres since 2017. In the form of adult education courses, interested parties were informed over several evenings about the consequences of climate change in their region and possible adaptation strategies.

Ratter undertook the task of analysing the first pilot courses to optimise the follow-up classes. She and her employees therefore sat in on these courses. She also conducted interviews with the participants. The insight gained is that it is important for the participants to meet personally and exchange ideas. Ratter: “The participants already possessed a great deal of prior knowledge - what was crucial was not so much the knowledge transfer, but the opportunity to tackle the topic together. For “climate-fit” this also meant that online courses were not an option.” It also became clear that climate change is an extremely emotional subject. This was also taken into consideration in subsequent “klimafit” courses.

Understanding people and engaging their participation - that is what is paramount for Ratter in coastal development projects or for adapting to climate change. “It is very clear that socioeconomics and regional culture play a significant role in coastal research. If we don’t take into consideration the societal system with its non-linear dynamics, then it will be difficult to implement measures successfully despite all the scientific knowledge.” 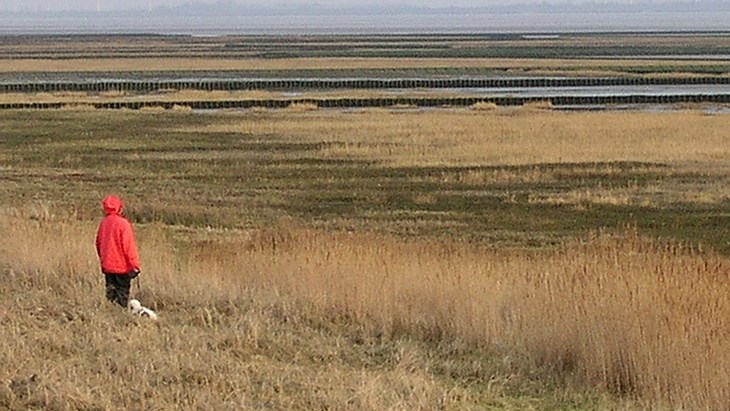 Such measures should be addressed in the current CLICCS project (Climate, Climatic Change and Society), coordinated by Hamburg University. The aim is to implement ideas for near-natural coastal protection on the German North Sea coast. Fishing, eutrophication of the Elbe and alternatives to hard dikes, such as floodplains and polders, are topics that Ratter and her colleagues in CLICCS must reconcile. When you think about how successful her work has been so far, then she will very likely master this challenge as well.