COSYNA is financed and coordinated by the Helmholtz-Zentrum Hereon Centre for Materials and Coastal Research GmbH. The scientific work is carried out jointly with partners of the Helmholtz association, universities, and monitoring authorities.

The Helmholtz-Zentrum Hereon received from the German Federal Ministry of Education and Research about 9 M€ of investment capital for construction and development to develop COSYNA. The project has been implemented between 2010 and 2014 and will continue to expand its range of products after the initial phase. COSYNA is developed and operated jointly with 9 partner institutions in order to broaden and support the scientific and operational goals of COSYNA and its partner institutions. Money for personnel, operation and maintenance is provided entirely by the Helmholtz-Zentrum Hereon and its partners. 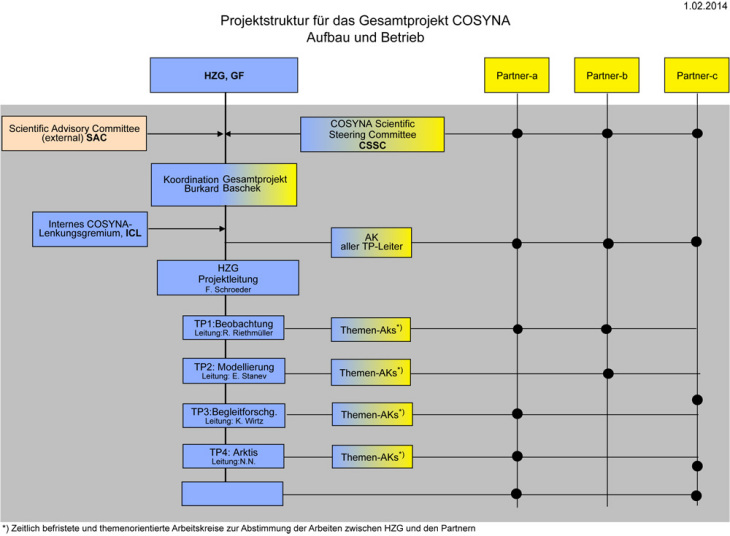 In total, COSYNA involves more than 100 scientists at Hereon and the various partner organisations. Co-ordinating such an initiative requires structures and dedicated personnel to deliver its day-to-day management. A management team has been established at Hereon. A number of boards, such as the COSYNA Scientific Steering Committee (CSSC) and Scientific Advisory Committee (SAC) the support its work.

In order to co-ordinate the scientific work between Helmholtz-Zentrum Hereon and the partners COSYNA Working Groups (Arbeitskreise, AKs) have been established.
The tasks of the working groups are to specify and harmonise COSYNA operations across the different institutions. This includes the specification of technical details for different stations, the overall strategy of data management & quality assurance.
The working groups meet regularly until they have completed their task. New working groups can always be initiated if needed.