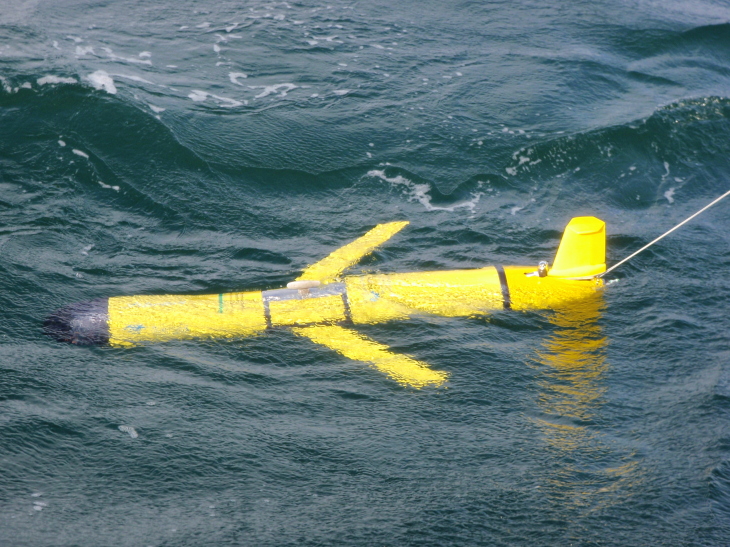 Underwater gliders are autonomous underwater vehicles designed for long-term (weeks to months) survey missions. By actively changing their buoyancy the gliders dive and climb using very little energy. Small wings propel the glider forward, creating a saw-tooth shaped path. Typically, a glider performs 30 to 40 dive/climb cycles before returning to the sea surface after approximately four hours where it communicates with the scientists via satellite. This schedule allows for measurements of high temporal resolution and for near real time retrieval of a subset of the collected data.

Gliders are a cost-effective platform that is unaffected by adverse weather conditions. They are mostly used for measurements along transects, but can also be used virtually stationary. While gliders can be equipped with sensors for a variety of quantities they are particularly useful for the observation of suspended sediment dynamics in the water column using optical backscatter sensors as a proxy for sediment concentration.

A 30 nm transect measured in the German Bight during August 2013. The top panel shows the temperature and the bottom panel shows the measured turbidity The water column was stratified with a pycnocline at around 15 m depth (top panel). Sediment resuspended from the sea bed, was well-mixed vertically, but only up to the pycnocline, represented by the black solid line (bottom panel). This is due to the strongly damped turbulence at the pycnocline locally inhibiting the upward transport of suspended sediment. -image: Lucas Merckelbach / Hereon-

In future, the gliders will be equipped with turbulence microstructure sensors aiming at providing new insights in the mixing of temperature, salinity and suspended sediment. These highly sensitive sensors need a virtually vibration-free platform to operate from, a requirement the gliders match almost perfectly.