The company where Henning Scheel works produces membrane systems that include functions such as recovering valuable solvents and trapping harmful exhaust gases. He has been collaborating for many years with the Helmholtz-Zentrum Hereon on this subject: the experts at the Institute of Polymer Research have developed the basic technology and regularly support Flowserve SIHI in developing their products. 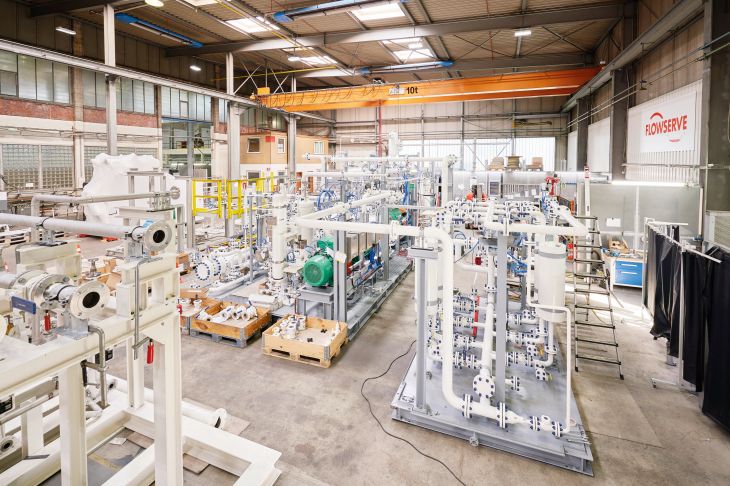 Tailor-made production for membrane plants: A view into the production hall of Flowserve SIHI
in Tönning, Schleswig-Holstein. Photo: Hereon/Christian Schmid

Mr Scheel, how do the membranes that you use in your systems work?

The membranes are made of special polymers. You shouldn’t imagine these as sieves with tiny pores through which molecules of the right size can slip. Instead, these molecules are dissolved in the membrane and can pass through it. The different substances in a gas mixture can be separated as a result. A prerequisite is a pressure gradient: there must be high pressure on the side of the membrane where the gas mixture is located. On the other side, where the molecules to be separated should accumulate, lower pressure is needed. Our firm produces the necessary compressors and vacuum pumps—our core business—which is ideally supplemented by the membranes. The fundamentals for the membranes were researched by the Helmholtz-Zentrum Hereon. This is why the Hereon receives licensing revenue from us for every membrane system sold—and has been since the early nineties.

In which fields are your membrane systems used? 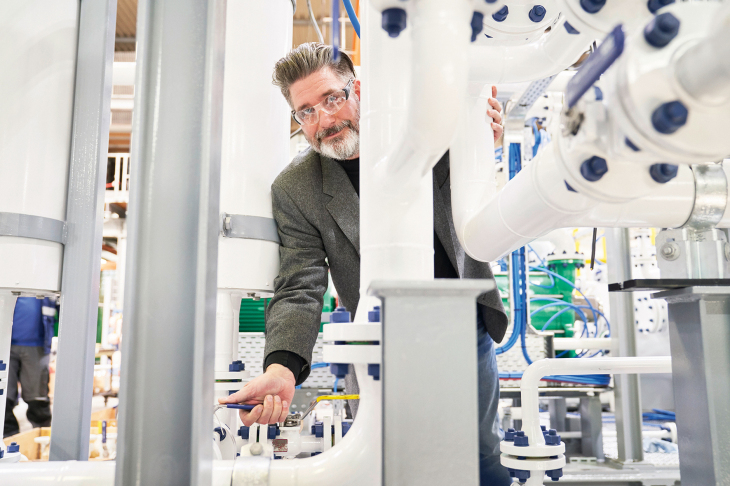 The brand new system is assembled in the factory. Photo: Hereon/Christian Schmid

There are essentially two fields of application. On the one hand, the systems are used for recovering reusable materials. One example lies in the production of a particular type of polyethylene, one of the most commonly produced plastics in Germany, where a certain method uses large quantities of the solvent hexane. A portion of the hexane evaporates and normally gets lost during the process. This can lead to losses of up to 18,000 US dollars in large factories—keep in mind, this is per day! Our membrane systems can recover 99.9 per cent of this solvent. They therefore pay for themselves in a short period of time, after merely a few months. In concrete terms, the gas to be separated—a mixture of nitrogen and hexane—is initially condensed using compressors. It then flows through a condenser into cylinder modules. Each of these modules contains up to thirty square meters of membranes in the form of envelops. The gas flows on a zigzag course through the module and over these pockets. The hexane molecules are dissolved in the membrane and are thus separated from the nitrogen, then subsequently conveyed back to the suction side of the system and liquefied in the condenser. The hexane obtained in this way can then again be used for polyethylene production. The purified nitrogen can also be used again. An exhaust gas enters the system and two recycled materials are extracted.

And the second field where the systems are used? 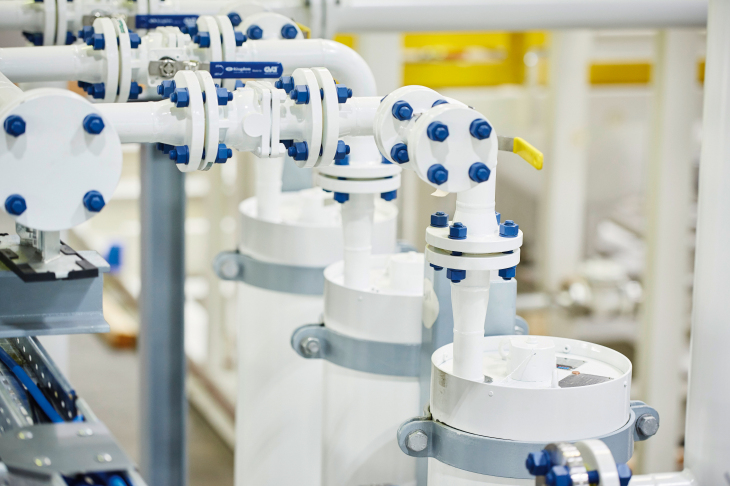 This lies in exhaust purification. A good example can be found in gasoline vapors, which inevitably form in a tank farm: a portion of the petrol in a tank evaporates, especially when there are high temperature fluctuations. Previously, these vapours were simply blown into the air through pressure relief valves. Today, operators must comply with legal limits and remove the petrol from the air. In order to do so, they use our membrane systems: they separate the petrol from the air, the vapours are liquefied in the system and are returned to the tank. These systems also pay for themselves over time for the operator.

How does your collaboration with the Institute of Polymer Research look in concrete terms? 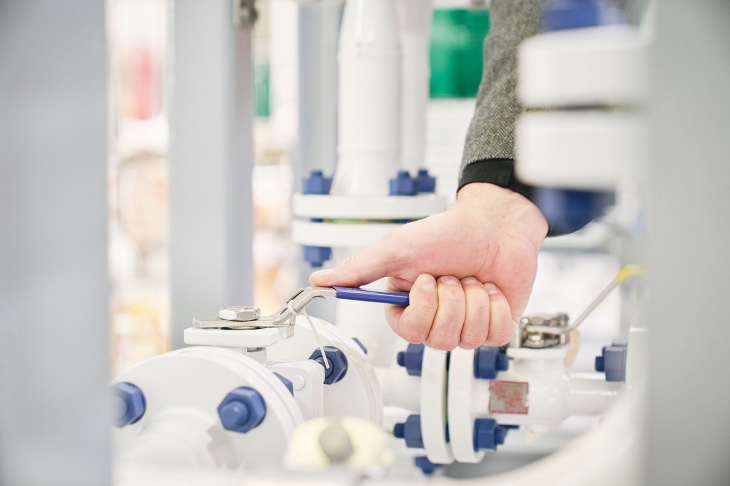 The membrane systems are manufactured as requested by the customer. Photo: Hereon/Christian Schmid

The technology has been constantly improving over the course of time; the membranes in particular have become considerably more selective. The Helmholtz-Zentrum Hereon has contributed quite a bit in this regard. We're collaborating on several levels right now. If a client, for example, asks us whether a membrane can be utilised for a certain process, we first compile a feasibility study especially for this application scenario. If we do not know precisely how well a membrane under the required temperature and pressure conditions works, or how effectively a certain material can be separated using a membrane, we discuss these issues with the experts at Hereon and outline solutions together. We can then judge what is possible and what is not.

We also utilise software tools developed in Geesthacht. We can thus realistically mimic the membrane’s behaviour in a process simulation—the basis for accurately designing and creating the dimensions for a system. This software module is constantly under development at the Institute of Polymer Research, whereby our calculations have become increasingly more accurate over time. And lastly, the Hereon has measured numerous materials in the laboratory over the years. These measured values serve as a basis for our calculation of a membrane. If we are dealing with a new substance, we sometimes commission the institute to undertake the measurements. It’s therefore extremely helpful that I worked in Geesthacht earlier for a number of years. I know the current department head, Dr Torsten Brinkmann, from my time spent there. This helps in communicating—we’re speaking the same language.

Have there already been joint research projects? 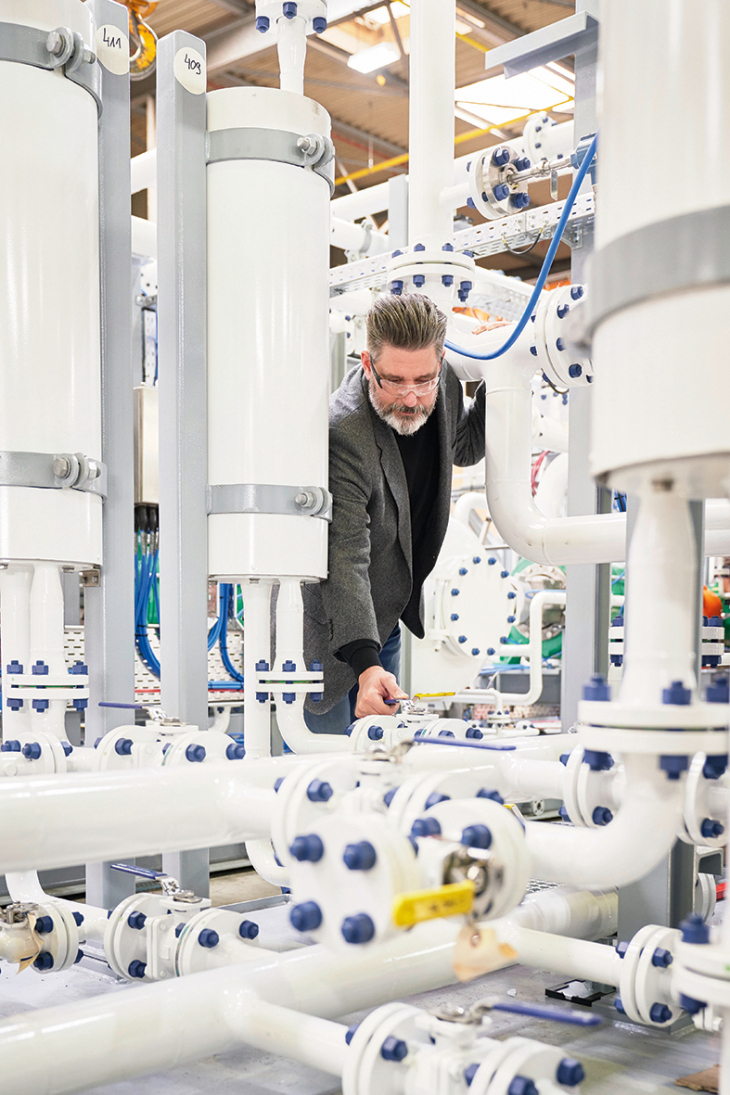 The membranes from Geesthacht are in the high white containers. Photo: Hereon/Christian Schmid

Yes, for example, in the area of CO2 separation. Within the framework of the “MemKoR” project, supported by the Federal Ministry for Economic Affairs and Energy, the Hereon developed a two-stage membrane system that filters the CO2 from coal power plant flue gases. One could, in principle, use this CO2 as the basis for polymers. In our production hall in Tönning (Schleswig-Holstein), we created this system, including monitoring and analytics, on behalf of the Hereon and then later modified it. It is being tested in a power plant in Karlsruhe, among other places.

We were also collaboration partners in a research project supported by the Federal Ministry of Education and Research called “Mixed Matrix Membranes for Gas Separation”. In basic experiments, the Hereon observed that membrane selectivity increases when activated carbon is mixed in the membrane polymer. Within the context of the BMBF project, we wished to determine, together with the TU Berlin and the activated carbon manufacturer Blücher, to what extent this effect could be implemented in an industrial pilot plant. Our part consisted of calculating the process and testing it at an industrial firm.

What were the results of this project? 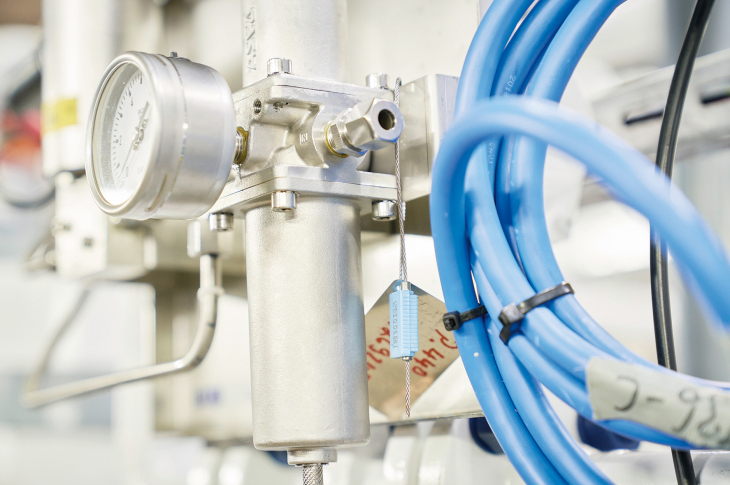 The results actually showed that certain hydrocarbons can better be separated from each other than with conventional membranes. For example, higher hydrocarbons such as butane can in principle be separated more effectively from a gas mixture to obtain a gas with the highest amount of methane for combustion in a gas engine. You do, however, need relatively high pressures for this, something that limits the field of application at present. But should an area of application be found, we would be very interested as a company in utilising these new membranes in our systems.

In your view, where do the future markets for membrane technology lie? What could be possible with the new, improved membranes? 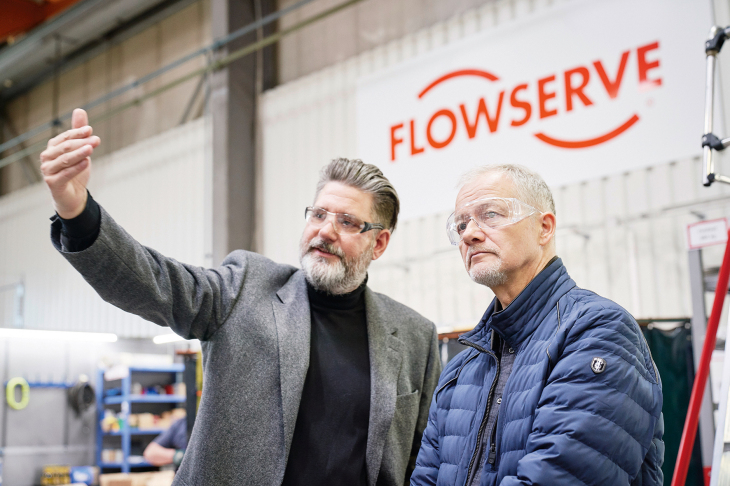 The interview was conducted by science journalist
and physicist Frank Grotelüschen in the
production hall of Flowserve SIHI.
Photo: Hereon/Christian Schmid

We're always essentially searching for new fields of applications for our systems. There are, for example, materials that cannot be separated using current membranes because they simply dissolve the polymers. In this regard, we’re hoping for developments that would make the membranes more stable—then we could also separate components that still cannot be processed today. It would also be interesting if we could make the membranes more stable with regard to temperature and pressure. Here we also hope for vital inspiration in the future from the Institute of Polymer Research in Geesthacht.