Hydrogen is considered one of the key technologies in the energy transition. It can store renewable electricity, can power automobiles, ships and aircraft without releasing emissions and can facilitate CO2-neutral steel production. But how can a hydrogen economy be established everywhere? Two individuals particularly interested in this new technology discuss the matter: Hamburg Economics Senator Michael Westhagemann pursues the vision of making the Hanseatic port more climate friendly with the help of hydrogen. And the Hereon researcher Thomas Klassen develops technologies with which this green energy source can be produced and stored more efficiently than ever before.

There are many successful pilot projects for producing, storing and utilising hydrogen. What is necessary to help this technology make a breakthrough?

Westhagemann: We now need to show that the hydrogen economy can be economical. To do so, we need large facilities on the industrial scale – for example, for CO2-neutral hydrogen production. To implement this concept we want to build an electrolyser in Hamburg Harbour that splits water with the help of regeneratively produced electricity, thereby producing green hydrogen. With a 100 megawatt capacity, this electrolyser will be a considerably larger project than any before – a real flagship of an endeavour. This facility could even be finished in 2023. The first consumers could be a steel mill and an oil company that want to produce synthetic kerosene. Later, the many trucks on the road daily in the harbour area could be powered by hydrogen – including even smaller ships.

Klassen: Technologically we’re pretty far advanced in Germany. What is still lacking in part is the interplay of individual components, the interaction of production, storage and consumption in large industrial systems and applications. Here is where policy is really needed, and Michael Westhagemann is one of the protagonists propelling the issue forward. His initiative, to construct a 100 megawatt electrolyser in Hamburg Harbour, is a project that can strikingly demonstrate hydrogen’s potential. 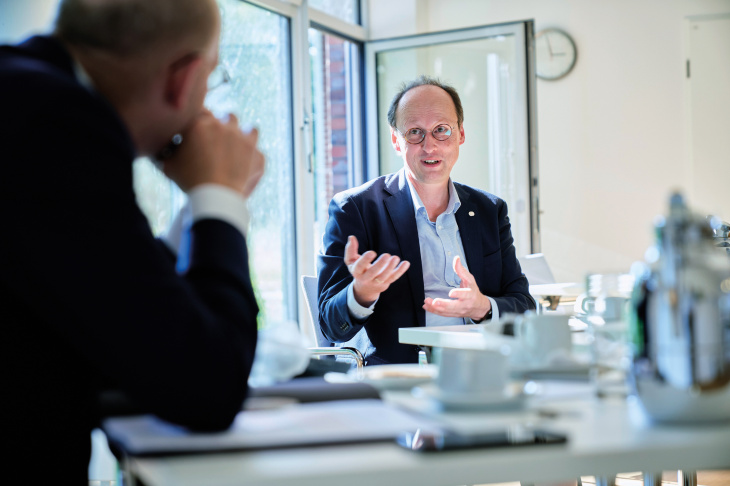 There are certainly other research issues still. What are they and how can the Helmholtz-Zentrum Hereon help resolve them?

Klassen: We are working on storage in metal hydrides, which are metals that can absorb hydrogen like a sponge. The amazing aspect is that double the amount of hydrogen fits in a metal hydride tank as in an equally-sized compressed or liquid gas tank for hydrogen. In order to convert our research into practice, we are working with the automotive industry – specifically with Volkswagen – and are on the right track. We are also developing what are known as photo-electrochemical cells. They can split water directly with sunlight and possess the potential to produce hydrogen with a great deal of efficiency. We’ve already constructed small prototype cells, and I can imagine that we’ll have products ready for the market in five to ten years. And finally, our polymer researchers are working on membranes that filter hydrogen from a gas mixture. It’s conceivable, for example, to produce hydrogen with excess wind power and to feed it into the Hamburg gas network. If the hydrogen is needed somewhere, it could be separated from the natural gas with these membranes. This means hydrogen could simply be transported in the gas network and a separate hydrogen pipeline network would not be necessary.

Mr Westhagemann, you have co-initiated the Northern German Hydrogen Strategy. And in June, the federal government introduced the National Hydrogen Strategy, a multi-billion Euro program. The EU also wants to support this technology with its “Green Deal”. What can we hope for from these initiatives?

Westhagemann: That is naturally a boost that should greatly accelerate development. Funding support is now available for implementing larger projects and also in the most varying of fields – in aviation, for example, which has heavily been shaken by the corona pandemic. Offering climate-friendly flights, particularly for short hauls, will become increasingly important for airlines in the future. Airbus has already taken up this issue and is developing a hydrogen-powered passenger jet that should be ready for the market in 2030. Another area is in the hauling of heavy goods: a truck or bus powered by batteries makes less sense because batteries are heavy and require a great deal of time to charge. This is something that manufacturers in Asia have long understood and why they are placing their bets on hydrogen and fuel cells. One other example is in shipping: here I find the Hereon plan highly interesting, to equip their research vessel to use hydrogen power. 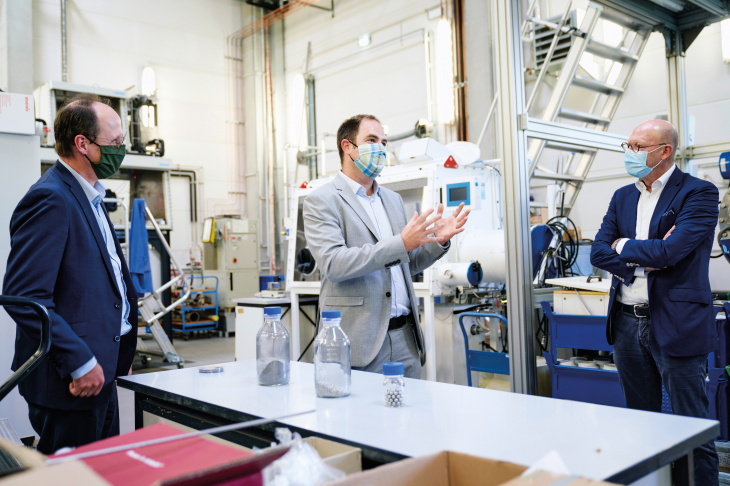 In the Hereon laboratory, Dr Julian Jepsen (center) explains how the raw material for the metal hydride-based storage that is developed at the Helmholtz-Zentrum Hereon is produced. The light metals are ground into an increasingly fine powder so that the surface area increases and more hydrogen can be absorbed. Photo: Hereon/ Christian Schmid

Which collaborative projects between Hereon and Hamburg exist already and which ones are in the planning?

Klassen: In a larger consortium, we want to aid Hamburg Harbour in converting to green hydrogen. This includes all logistics as well as ship propulsion. Here we collaborate with various Hamburg companies and universities as well with the new DLR Institute of Maritime Energy Systems, which is currently being created in Geesthacht and will, for example, develop climate-friendly propulsion systems for ships. In another project, we are collaborating with Stromnetz Hamburg and Gasnetz Hamburg as well as with Helmut Schmidt University to link the electricity and gas networks. We are also working together with Airbus and TU Hamburg on a concept to develop the energy infrastructure: it’s certainly of no use if an aircraft flies on hydrogen but has nowhere to refuel. Here there are two options. It would be possible that an aircraft – such as that planned by Airbus – could fly directly with hydrogen and all airports would provide hydrogen in the future. Hydrogen, however can also be used to produce synthetic kerosene that can power today’s aircraft. Both paths ultimately lead to the goal. It remains to be seen what the more economical and climate-friendly route is for short and long flights.

Westhagemann: Above all, these networks are vitally important to further develop the hydrogen economy and to identify new thematic topics. It is, however, not at all easy to set up and design such networks, as partners must first find each other. This worked very well here and I’m thankful to the Helmholtz-Zentrum Hereon that we can together develop these topics in a network.

A great deal of green energy is required for a comprehensive hydrogen economy. Where could that come from?

Westhagemann: We likely won’t produce it all ourselves, Instead, we need to see where hydrogen can be economically produced with regenerative energy – for example, with solar energy. There are sunny countries, such as Portugal, Spain and Italy as well as the Arab nations. Countries such as Saudi Arabia and the United Arab Emirates prospectively want to leave the crude oil industry behind and they have recognised a new opportunity in becoming green hydrogen exporters.

The hydrogen economy requires its own infrastructure of fuelling stations and storage facilities. How is that to be developed everywhere?

Westhagemann: Germany currently has a network of approximately one hundred fuelling stations. By the end of 2022 it should be two hundred. The question is: how does it look beyond our borders? It would obviously not be advantageous if trucks on their way to Scandinavia couldn’t refuel with hydrogen in Denmark. We therefore engaged in dialogue with neighbouring states; we want to create a northern European congress to better synchronise in the future and to provide infrastructure across national borders. 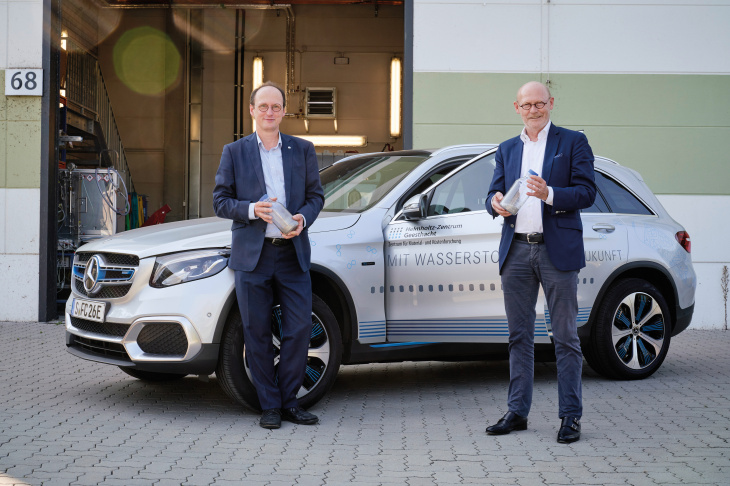 The Helmholtz-Zentrum Hereon’s fleet includes a hydrogen vehicle. It refuels with hydrogen, which is converted into electricity in a fuel cell. The electricity drives the electric motor, producing only water vapour as exhaust. Institute Director Klassen (left) with politician Westhagemann (right). Photo: Hereon/ Christian Schmid

Klassen: We are developing concepts in which fuelling stations are integrated with existing energy infrastructures. These sites can then utilise surplus energy in the network for producing hydrogen for the fuelling station and can also use hydrogen for reconversion to electricity or for heat generation. Within the Northern German Hydrogen Strategy and together with a group of experts, we are establishing suitable criteria for determining locations.

And now a glimpse into the crystal ball: in which sector could hydrogen be established first – in transport, industry or in the energy sector? And where will we be in five to ten years time?

Westhagemann: In terms of the Hamburg Harbour, my hope for 2025 is for larger projects in the petroleum and chemical industries. The first trucks in the harbour should be low-emission vehicles, perhaps even some trains as well. Then we could better determine how much CO2 could be conserved with the new technology and what could be envisioned by 2030. As the first large-scale application, I could imagine trucks and buses running on fuel cells and hydrogen.

Klassen: It is also important to link the sectors – that is, to integrate electricity, heat and mobility. This way renewable energies could be optimally utilised and integrated into our system. One example is that we have so far been wasting 1.5 billion Euros in green electricity every year in Germany due to an oversupply of wind that is not fed into the grid. With this surplus electricity, hydrogen could be produced that could then be utilised in different sectors – be it for reconversion to electricity when the wind isn’t blowing or as fuel for vehicles or for heat generation. By linking these sectors, I see enormous potential, economically as well.

Thank you for the interview.

The interview was conducted by Science journalist Frank Grotelüschen.
Published in in2science #10 (December 2020)