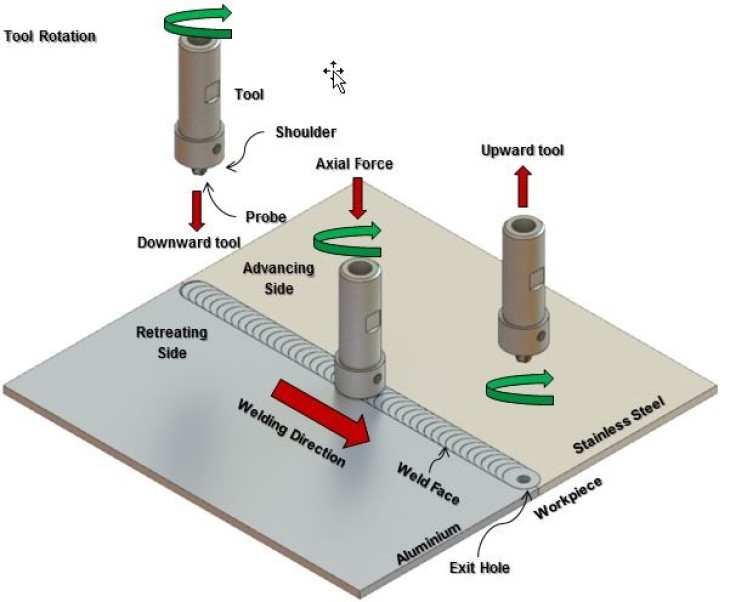 Friction stir welding (FSW) is a solid state joining process, which was developed and patented in 1991. And represent’s one of the core competences where Hereon has taken an international leading position. Such processes allow to a very high degree of freedom to weld similar and dissimilar materials, which can not be treated by any other method.

Principles of the process
The steps during friction stir welding can be described as followed.
1. The tool starts to rotate and moves toward workpiece
2. The probe gets into contact and begins to plunge into the workpiece. Hereby friction and shear forces (plastic work) generate heat which plastizises (softens) the workpiece below the shoulder and around the probe
3. The tool travels in the direction of the abutting edges. Hereby the plastizised material is stirred around the tool joining the to plates
4. Tool moves out of the workpiece. The materials cool down, the weld is build and an exit hole is left

The main process parameter are the rotational speed, the welding speed and downward force (pressure) of the FSW tool.

FSW Welding Technologies are of interest of the aircraft, aerospace, automotive, locomotive, shipbuilding industry were the advantages of the process (e.g.: high joint strength, low distortion, weight neutrality and process automatisation, no material addition, no shielding gas for Aluminum and Magnesium no fume) are beneficial. In comparison to conventional fusion welds, FSW has many advantages such as: lower temperatures required to weld, environmentally clean process, low distortion and residual stress, greater weld strength, little or no porosity, little or no post weld repair, no solidification cracking, no welding fumes, improved corrosion resistance, no need for consumables and no spatter.

A variant, or more correctly a development, of the conventional FSW have been obtained with the use of a stationary shoulder, originally in the case of titanium weldments. The main difference between the two technologies is due to the mechanical separation between the shoulder and the probe, allowing for the shoulder not to be rotating as shown in.

Differently from conventional FSW, where the major of the heat, necessary in order to obtain the joining, is generated by the friction between the shoulder and the top surface of the material, in case of SSFSW the shoulder has just the function to retain the plasticised material in the correct position, giving a small contribution to the heat generation. Due to this the heat is distributed more uniformly throughout the thickness of the material leading to a more homogenous crystallographic structure.
Aditional Adwantages of the SSFSW are:

A solution in order to reduce weight in modern aircraft is the use of welding technologies to replace rivets in skin-stringer joints. 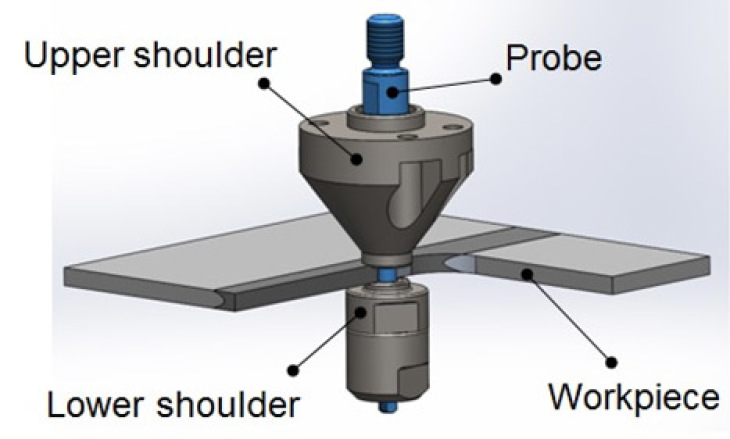 The Bobbin Tool variant uses a two-shoulder tool system and avoids the need of a backing plate while eliminating roots defects by full penetration of the material. Further advantages are low process forces and distortion due to a symmetrical heat input. This set-up allows welding of hollow structures like extrusions, pipes or tanks.

The machine set-up is identical to FSW and the tool consists of an upper and a lower shoulder.

Principles of the technique
The tool is prepositioned at the initiation site which is to be processed (a). Consequently, the tool in set under rotation and introduced into the material (b). Via friction, the material beneath the tool is heated up and plasticized. Once a sufficient plasticization is reached, the translation motion is started (c) and the process zone created. Finally, the tool is retracted from the sample sheet (d).

Potential Applications
Grain refinement / Homogenization:
Friction stir processing can be used to homogenize an as cast microstructure locally, so that connection parts or sealing surfaces can easily be improved. The final microstructure unusually incorporates small, recrystallized grains without the occurrence of pores. The processed material usually has a higher strength compared to the base material. 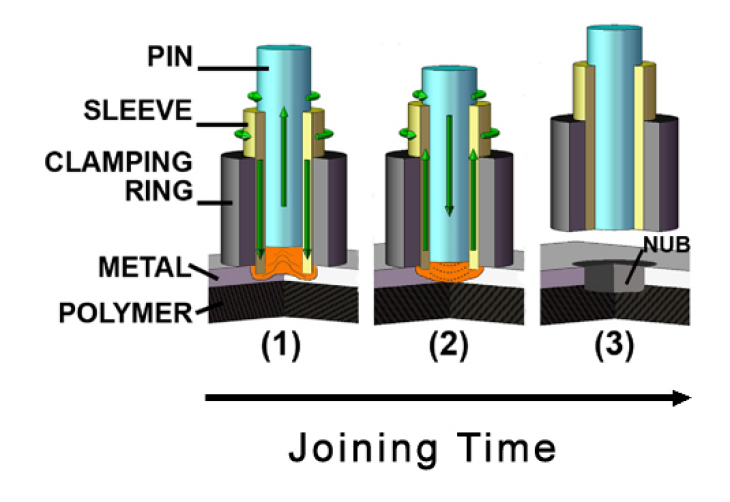 Since its introduction in 2009, Friction Spot Joining (FSpJ) has shown high performance in producing polymer-metal hybrid structures. Therefore, this technique is being investigated to join lightweight alloys such as aluminium and magnesium with high performance engineering thermoplastics and composites. For this reason a friction spot welding / joining machine (RPS 100) is employed. Briefly, the metallic partner is plasticized and deformed due to the generated frictional heat and applied force. A metallic nub is created which is inserted into the composite. Simultaneously, a thin layer of polymer matrix is molten, and displaced around the joining area. The joint is formed after consolidation of the polzmeric molten layer. These are the two main phenomena responsible for joining mechanisms.

The term "joining" is used to differentiate spot joints where a sharp interface is present (minimal or absent atomic or molecular diffusion), such as in hybrid polymer-metal joints, while "welding" is used for joints without a discontinuous transition between joining partners (presence of diffusion mechanisms), such as "polymer-polymer" or "metal-metal" spot welds. 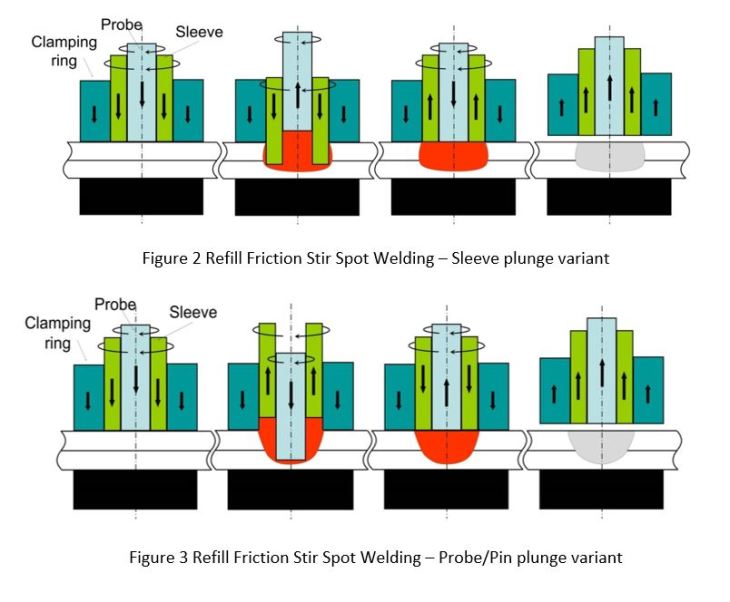 Friction Spot Welding or also known as Refill Friction Stir Spot Welding is a solid-state welding process developed and patented by Helmholtz-Zentrum Hereon GmbH. The process was developed as an alternative to riveting or resistance spot welding to produce similar and dissimilar overlap joints.

Refill FSSW uses a non-consumable tool consisting of three independent movable parts, including a stationary clamping ring and two rotating parts of the sleeve and the probe, as presented in Figure 1. The principles of the Refill FSSW are presented in Figure 2 and 3. First, the process starts with the clamping ring moving downwards to fix the workpiece for the rest of the process. Sleeve and probe start to rotate under a pre-set speed. Following that, in the sleeve plunge variant the sleeve plunges downwards into the workpiece while the probe is simultaneous retracted. The rotating sleeve generates frictional heat plasticizing the workpiece material. The downward movement of the sleeve forces the softened material into the cavity left by the probe. When a pre-determine plunge depth is reached, the rotating pin and sleeve move back to their initial position, pushing the material back into the joint to refill the keyhole left by the retracting sleeve. At the interface between the refilling plasticized material and the surrounding workpiece, metallic bonding is created by diffusion processes over the interface. In probe plunge variant as shown in Figure 3, the rotating probe plunges into the materials while the probe is simultaneous retracted. Finally, the tool is retracted from the surface, leaving a spot weld without a keyhole, as presented in Figure 3. Additionally, the Refill FSSW is also an excellent technique for closing keyhole, such as in conventional friction stir welding, by applying plug material.

Friction Riveting (Fricriveting), is an innovative joining technique for polymer-metal hybrid structures, developed and patented by the Helmholtz Zentrum Geesthacht in Germany. In this process, polymeric parts are joined by a metallic rivet; the joining is achieved by mechanical interference and adhesion between the metallic and polymeric joining partners. During the process, a rotating cylindrical metallic rivet is inserted into a polymeric base plate. Due to the local increase of temperature, a molten polymeric layer is formed around the tip of the rotating rivet. The local temperature increases leading to the plasticizing of the tip of the rivet. While the rotation is being decelerated, the axial pressure is increased, the so called forging pressure is applied and the plasticized tip of the rivet is being deformed and anchored in the polymeric plate. The technology is adequate to produce overlap riveted joints between metal-polymer, metal-composite and composite-composite connections. 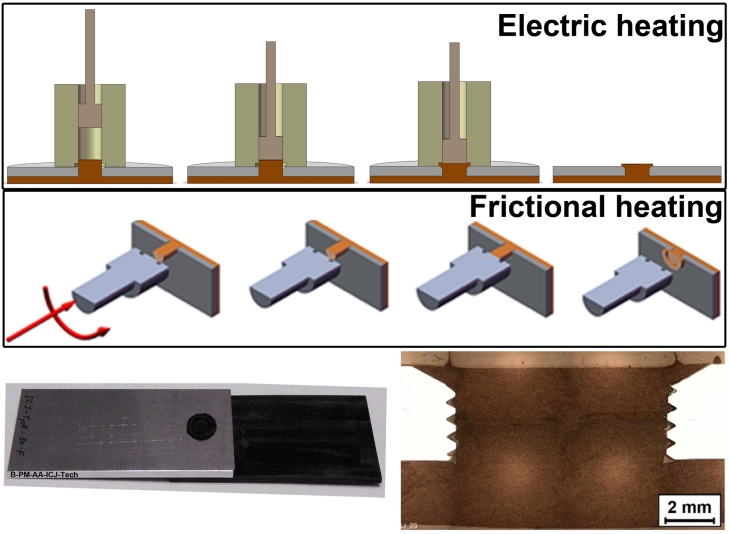 Injection Clinching Joining (ICJ) is a new joining process for hybrid structures, composed of one thermoplastic-based partner and a metallic or thermoset partner. The principle of the process is to produce joints through heating and deformation of a thermoplastic element (such as a cylindrical stud) integrated in the polymeric partner, which is previously inserted in a through hole (cavity) of a metallic/thermoset component, therefore creating a rivet from the structure itself. Spot joints created by ICJ process are tight and with good mechanical anchoring due to the cavity profiles on the metallic partner. ICJ is a potential technology for secondary and tertiary structures in automotive and aircraft applications.

Ultrasonic joining (U-Joining) is a new direct assembly technique developed by Helmholtz-Zentrum Hereon (patent EP 3 078 480 A1). U-Joining uses ultrasonic energy to join fiber-reinforced thermoplastics to surface-structured metallic parts, for instance produced by metal injection molding (Hereon’s patent EP 2 468 436 B1). Ultrasonic vibration and pressure create frictional heat at the materials interface, which softens the composite matrix and allows the reinforcement (structured on the surface of the metallic part) to penetrate the composite. As a result, a metal-composite hybrid joint with improved out-of-plane strength is achieved. 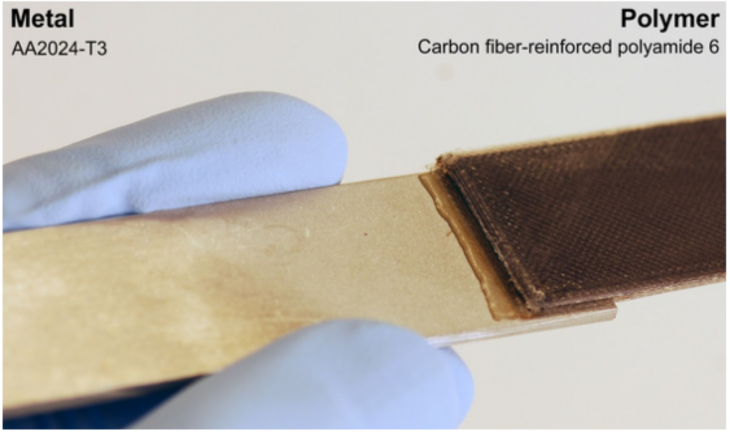 The AddJoining concept (German patent application number DE 10016121267.9) uses a new and unique approach to produce complex hybrid parts, by combining the principles of joining and polymer additive layer manufacturing (ALM) to produce layered metal-polymer hybrid structures. This is an important contribution to the state-of-the-art in additive manufacturing. AddJoining has potential to overcome the main limitations of production time of state-of-the-art manual lamination techniques, allowing for the production of future composite-metal layered structures with high-specific strength (Rm/density), tight dimensional and damage tolerances.