Hydrogen on the march! New laboratories at the Institute for Materials Research 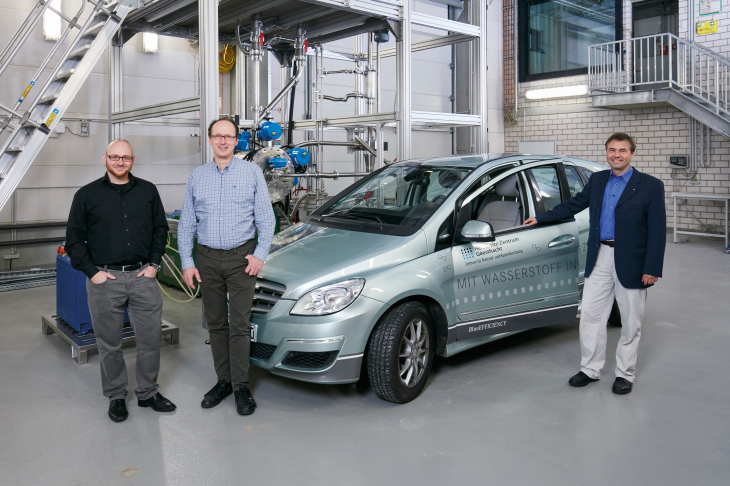 The steel cylinder is mounted on a green painted block, metal corrugated hoses as thick as a human arm function as supply lines. “This is our new high-energy mill,” describes Martin Dornheim, department head at the Hereon Institute for Materials Research. “A stirring rod in the cylinder makes small steel balls move. They crash into each other and grind the milled substance.” This creates an extremely fine, nanostructured powder with a remarkable property: it absorbs hydrogen like a sponge and thus constitutes an efficient energy storage medium.

The Helmholtz-Zentrum Hereon has been working on these “metal hydrides” for two decades. Now, the experts are taking the next step: in a new experiment hall, where the high-energy mill is located, they will be manufacturing and testing larger quantities of this innovative hydrogen storage medium – a major step towards implementation.

Hydrogen as an energy carrier 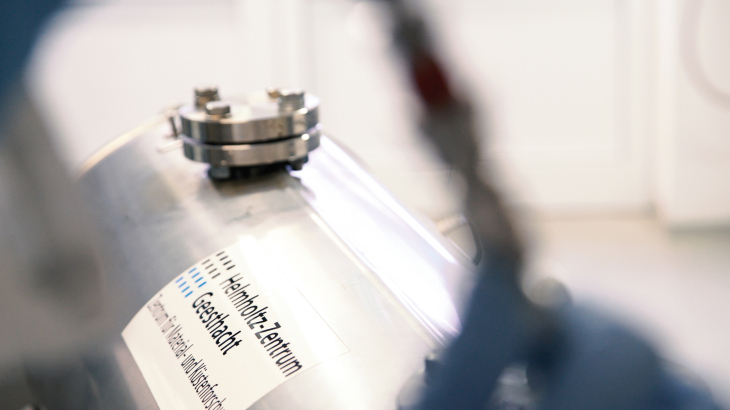 “Hydrogen is the ideal energy carrier for our sustainable energy supply,” says Thomas Klassen, director of the Materials Technology Division. “Hydrogen can be used to store both wind power and solar energy and to power climatefriendly fuel cell cars.” A challenge thereby is storing the gas.

Until now, either pressure tanks were used, storing the hydrogen at seven hundred bars, or cold storage tanks, storing it as a liquid at temperatures of minus 250 degrees Celsius. Both procedures are established, but they both have their disadvantages: the storage capacity of pressure tanks is not very large, while liquid tanks are relatively difficult to handle and are expensive. 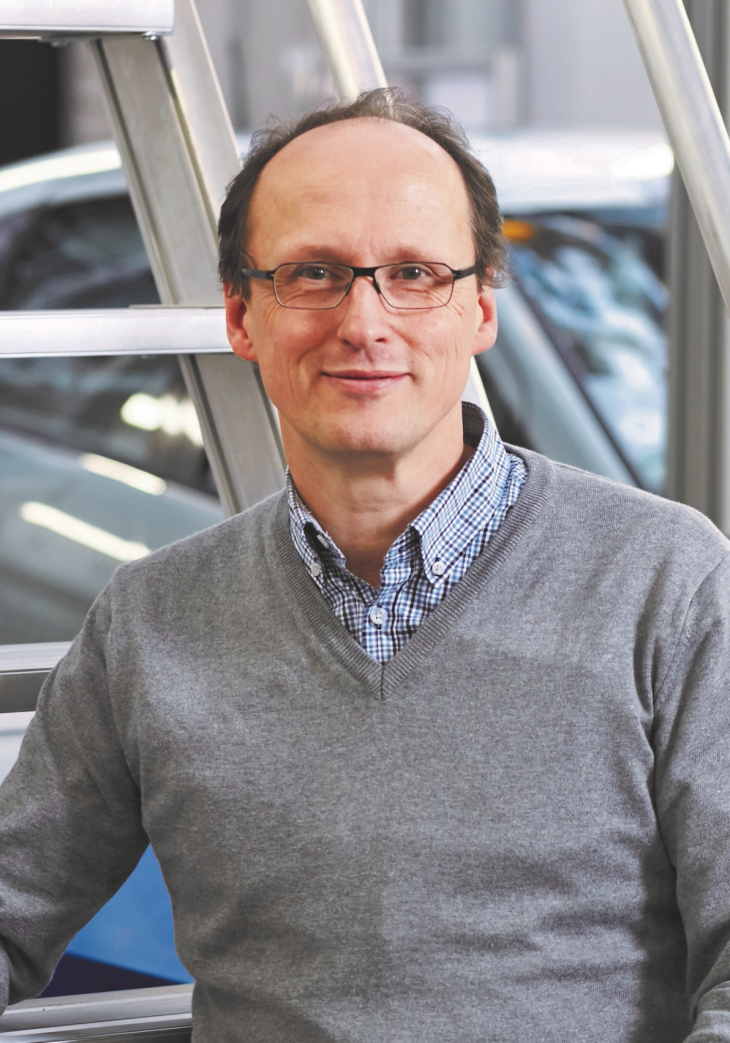 Metal hydrides promise an interesting alternative: they are metals that can absorb and bind hydrogen in astonishing quantities. “A hydrogenstorage tank based on metal hydrides can hold about twice as much hydrogen as a 700- bar pressure tank of the same size,” says Klassen. “This means that one could reduce the tank size of a fuel cell car by half.”

To ensure the tank doesn’t become too heavy, the use of lighter metals is recommended – alloys in lithium, magnesium or boron, for example. The problem is that these alloys are eager to absorb hydrogen, but they release it with difficulty. To get at the gas, relatively high temperatures are required – which made using light metal hydrides difficult for a long time.

The combination of metal hydrides

A few years ago, the Hereon researchers found a suitable solution: the combination of two different hydrides made it possible to significantly reduce the release temperatures. In this process, one metal atom is offered to the other as a reaction partner, both then willingly release the hydrogen. 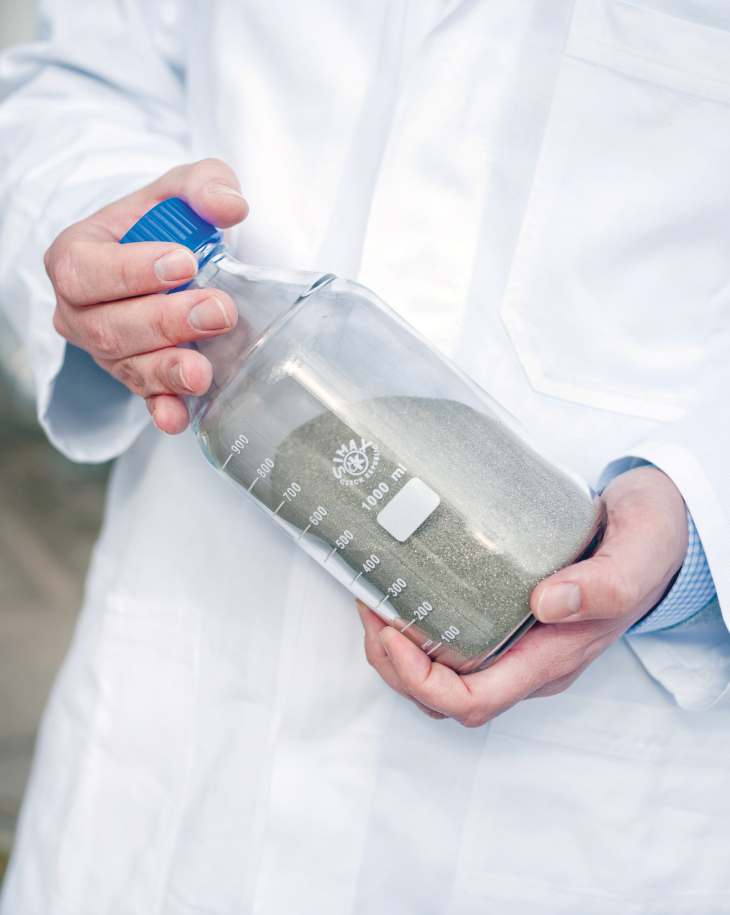 Finely ground metal powder is to absorb the hydrogen and release it as easily as possible. Photo: Hereon/ Christian Schmid

Recently, this “partner exchange” has even made it possible to release the hydrogen from the storage medium at ninety degrees Celsius. “This means the waste heat of a fuel cell could be used,” explains Thomas Klassen. “Therefore, no extra energy needs to be spent to get at the hydrogen.” Another challenge is that at every charging and discharging, the reaction partners must separate or find each other again. So that they don’t drift too far apart over the course of time, the hydrides can be enclosed in porous polymer membranes, which then only let the hydrogen pass unhindered. The material and polymer research ers at the Hereon, together with in dustry partners, are working on this aspect in a project funded by the German Federal Ministry of Education and Research. 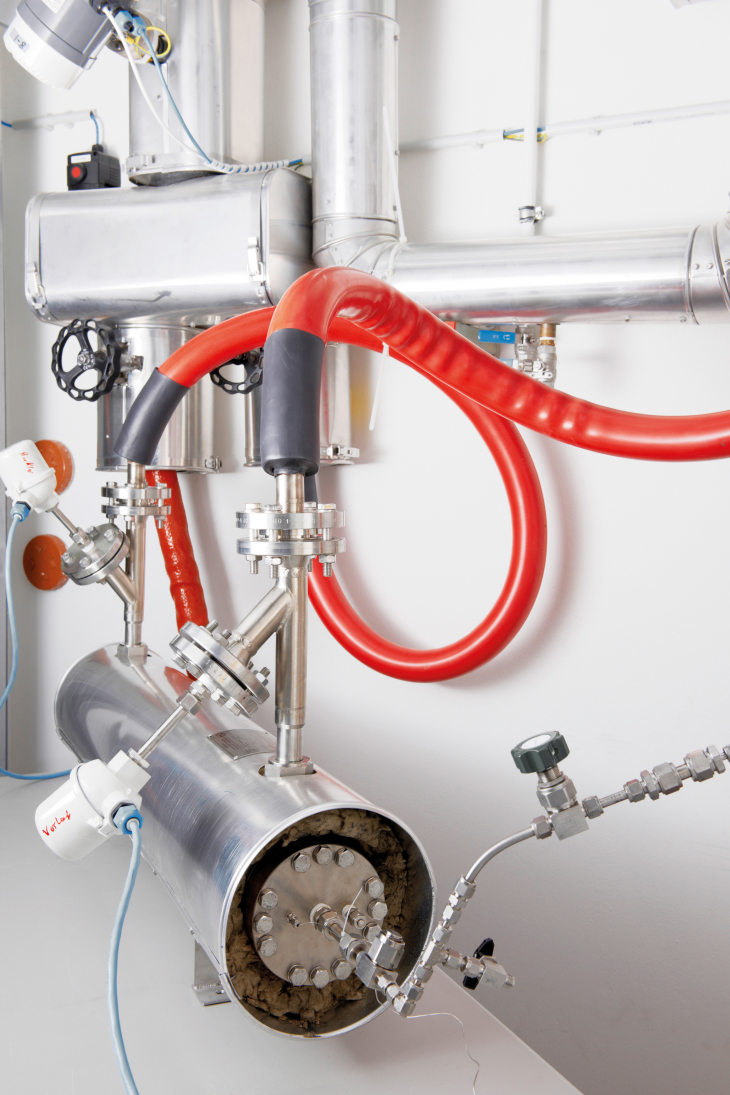 Until now, however, the Geesthacht researchers were only able to create and test these new hydrides in small quantities – in the gram or milligram range. For larger quantities, there are additional challenges: the hydrides must reliably demonstrate the same quality and desired storage behaviour. This is the purpose of the new experiment hall.

The researchers want to use it to create promising metal hydrides in larger quantities with the new high-energy mill. With its volume of one hundred litres, it is significantly larger than the devices the size of coffee grinders the scientists were working with until now.

The initial substance is mostly a coarse metal powder. Inexpensive recycling material can also be processed. Through the milling process, which can sometimes take hours, a nanopowder is created – tiny powder particles consisting of even tinier grains with a diameter between ten and sixty nanometres. “There are many pores and channels between the powder particles,” explains Martin Dornheim. “Even inside the particle, between the even tinier grains, there are areas that are less densely packed with atoms.” These pores, channels and microscopic areas allow the hydrogen to spread rapidly, to be chemically bound to the metal. In order for this to occur, the hydrogen molecule on the particle surface must first be split into atoms – which is helped by a special catalyser mixed into the metal in the high-energy mill. Other additives are there to prevent the coarsening of the grains within a particle. 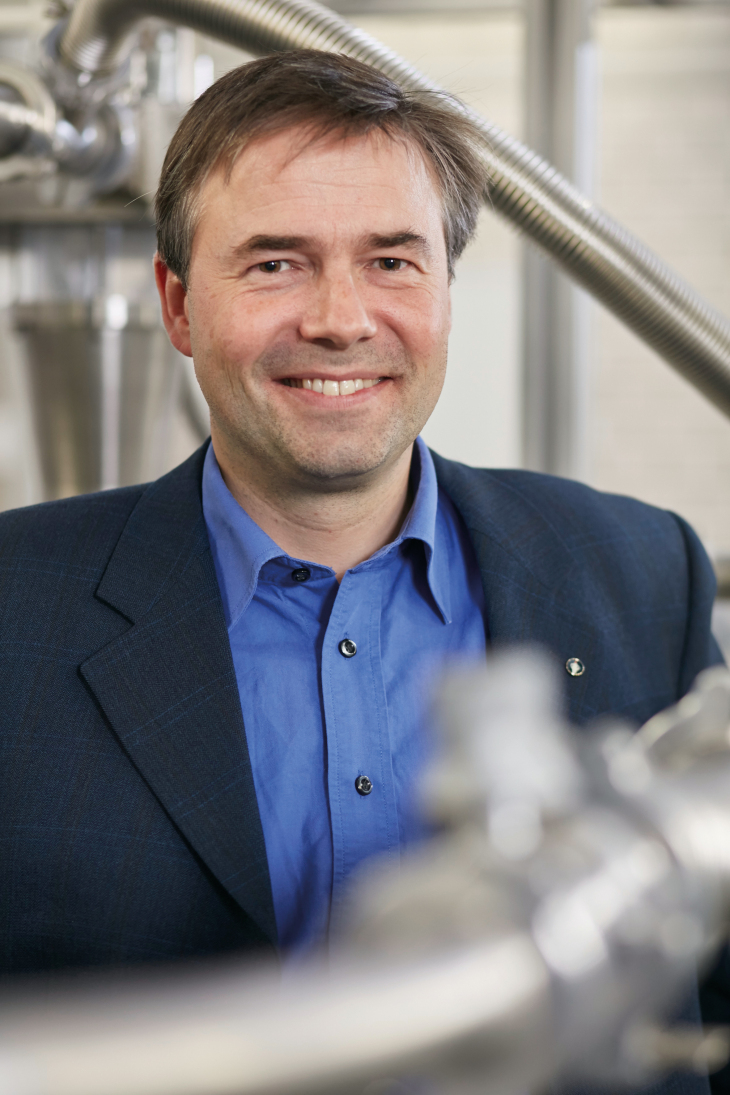 “We can monitor the particle size during milling,” says Dornheim. “This helps us to understand and systematically optimise the creation process.” The nanopowder thus created is then pressed into pellets. They can take the shape, for example, of an ice hockey puck that can be stacked in flexible configurations in a tank.

To put the prototypes through their paces, the hall also has a new testing device – a large white tank next to two solid concrete walls. Here, the storage pellets can be repeatedly charged and discharged. The experts can thus determine how large their storage capacity is and whether they can keep their properties for the entire service life of a car.

The experiments are to start at the beginning of 2018. In one of the projects, the Hereon researchers are teaming up with a large car manufacturer. The goal is to create a fuel cell test vehicle with a metal hydride storage tank on board.

“In the long term, we want to make a tank that only weighs one hundred kilograms and that can store fi ve kilograms of hydrogen," hopes Dornheim. 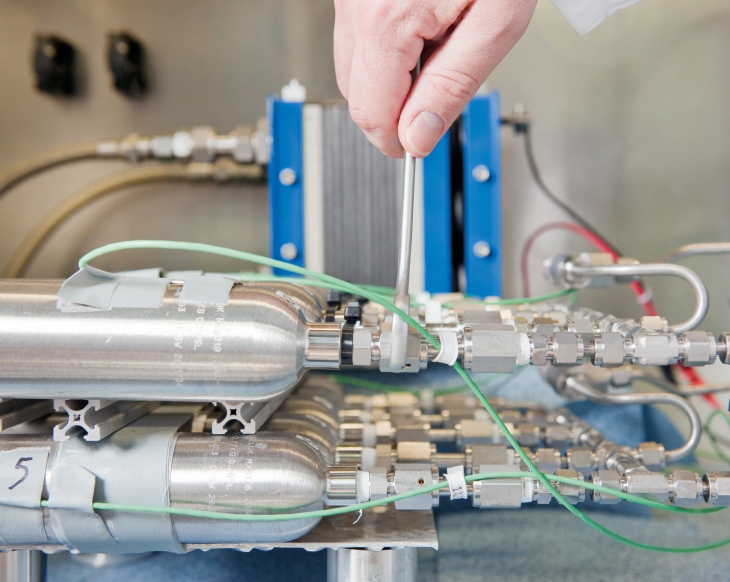 “A fuel cell car could thus drive five hundred kilometres in a climate-friendly and environmentally friendly manner.” The exhaust would namely give off neither CO2, nor nitrogen oxide, nor fine particles – instead only pure water.

For a good climate footprint, however, CO2-neutral generation of the hydrogen is necessary. This can be currently performed in what are known as electrolysers. These are devices that split water molecules into their components, hydrogen and oxygen, with the help of electricity. “If solar cells are used to run the electrolysers, the hydrogen is created climate-neutrally,” says Mauricio Schieda, group manager at the Hereon.

“We are working on a more elegant method, whereby the sunlight is used directly to split the water.” 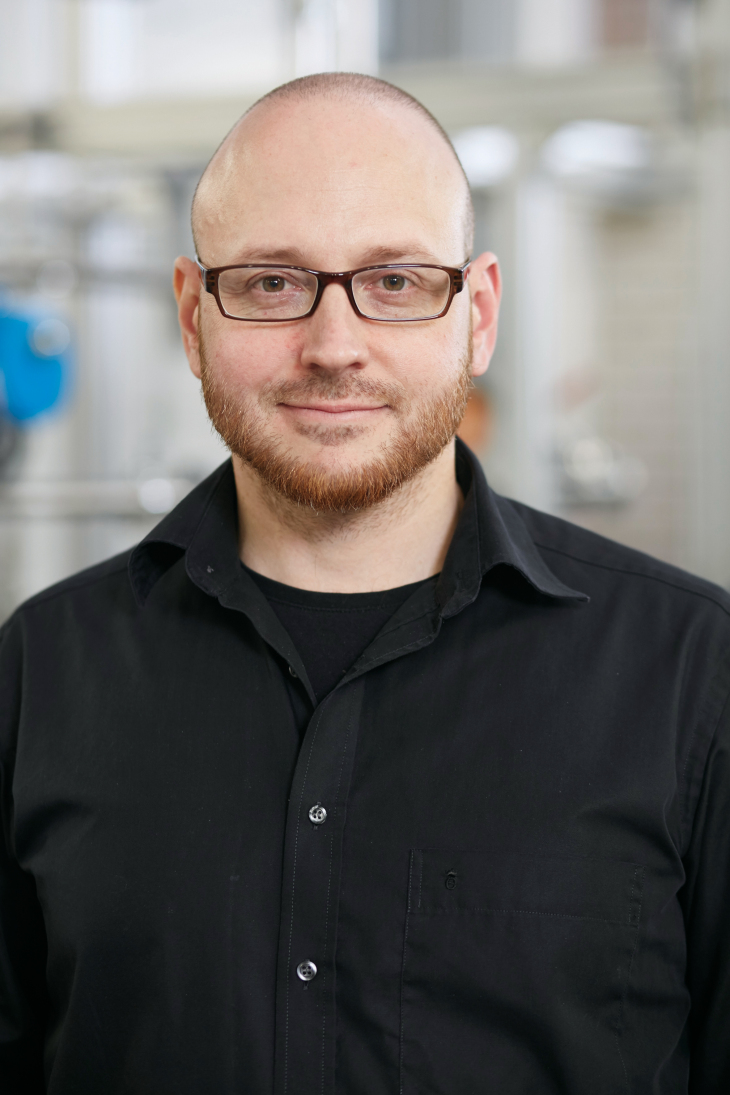 The vision is a new type of solar module for the home roof that gene rates enough hydrogen to cover the inhabitants’ needs.

The new technology is based on semiconductor materials that absorb light – just like a normal solar cell – whereupon charge carrier pairs are generated in the material. But the difference from a solar cell is that these semiconductors are immersed in an electrolyte – an electrically conducting liquid, such as a salt or an acid. “In the semiconductor, at the interface with an electrolyte, an electric field arises, which separates the created charges apart from each other,” explains Schieda. “We use these charges to split water molecules and generate hydrogen.”

The researchers are currently experimenting with semiconductors such as titanium dioxide, iron oxide or tungsten oxide. Schieda points to a stamp-sized piece of metal. “That is a titanium plate on which a thin layer of tungsten oxide, measuring only a few micrometres, is applied through a special spraying procedure, in cooperation with the Helmut-Schmidt University of Hamburg. ” The scientists then test these electrodes in a measurement cell and see how much hydrogen they generate under the influence of light.

“Electrodes based on such metal oxides have much potential, and the materials are inexpensive and stable,” explains Schieda. In the long term, even more efficient semiconductors and photo-catalysers are planned for use to significantly accelerate the splitting of the water molecule. In addition, the Hereon scientists are investigating the possibilities of new types of metamaterials, in cooperation with the TU Hamburg, to make even better use of sunlight.

“The field is still very young,” says Mauricio Schieda. “There is still much to learn and research before this technology can be implemented in practice.” The research possibilities in Geesthacht have been significantly increased: Schieda’s group has recently been provided facilities in a brand-new laboratory building. This offers much more space to manufacture, structure and closely analyse the electrodes.

The prospects are promising, according to the institute director Thomas Klassen. “With a photo-electrochemical cell, up to forty percent efficiency is possible in theory,” he explains.

If the researchers truly achieve such efficiency, a house roof equipped with modules should be sufficient in providing an entire family with hydrogen – stored solar energy for household electricity as well as for sustainable electro-mobility with fuel cell cars.