Status: 11.05.2020: Please note that due to the current situation we will no longer offer courses for this school year.

Holiday course in the school lab - Tracking down natural phenomena

From 2nd to 9th August, 90 pupils aged between seven and 14 came to Hereon´s school lab Quantensprung (Quantum Leap) for a day of experiments. 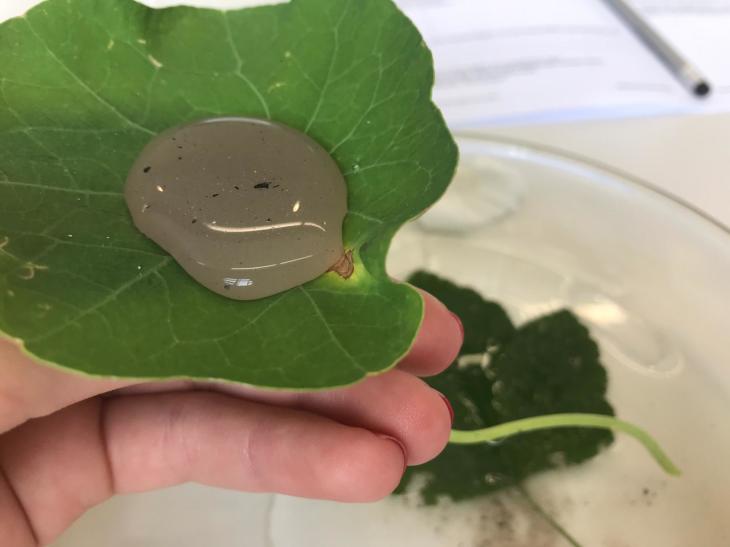 What is the lotus effect? The leaves of capuchin cress have an amazing self-cleaning property. [Photos: Franziska Grohn]

As part of the holiday offers of the youth rings in Lauenburg, Wentorf, Geesthacht and Schwarzenbek, six groups of around 15 young people were able to spend an entire morning in the Quantum Leap Laboratory to explore natural phenomena.

Does water have a skin? How can a lotus plant clean itself! Is a starch-water mixture solid or liquid? Air is invisible and strong; How can that be? Can CO2 drive a "rocket" into the air? These questions and more were on the agenda for this year's holiday programme.

As many pupils have already visited the school lab several times, the Quantum Leap team puts a lot of effort into offering new topics and experiments every year. The great interest in the course and the enthusiasm of the children proves their success.

Franziska Grohn (15 years) has summarized her experiences of the holiday course in a small picture story.

From 15th to 18th April 2019, 18 employee children aged between seven and twelve experimented, designed stage sets and rehearsed a theatre piece. A tight programme for the tutors and young researchers. 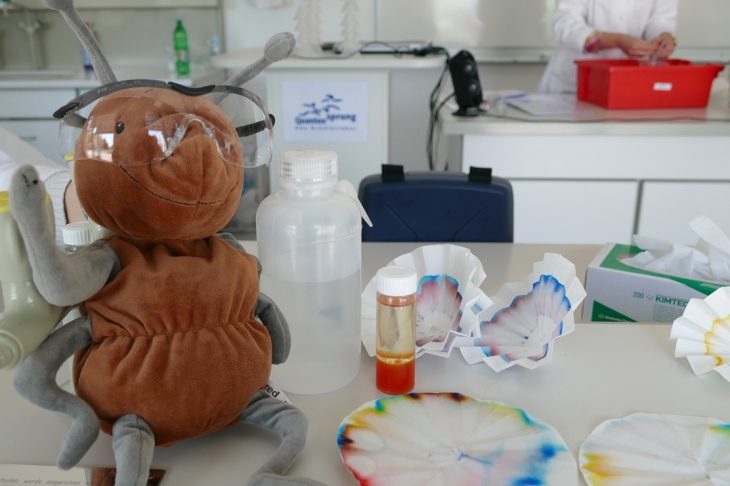 The research ant Frida supported the kids with their experimental work in the school laboratory Quantum Leap . [Photo: Hereon/Gesa Seidel]

The grand finale of the holiday course in the school laboratory Quantum Leap was the theatre performance in the well-filled GITZ conference room on Thursday afternoon. The excitement was great among the little actors and young scientists. However, all went smoothly and the audience was thrilled. Everyone learned so many things with the clever and adventurous ant Frida. Embedded in the play were twelve experiments that the kids presented and explained.

Under the motto "Science meets theatre", Sabine Mendach, Birte Cirotzki and Tana Mayrhofer from the school laboratory Quantum Leap developed a new learning concept and prepared it excellently in advance. "It was a special challenge for us to put together an entire play with children of such different ages in just four days," says Sabine Mendach, head of the student laboratory. The core business of the school laboratory is actually to familiarize senior class pupils from the 10th grade onwards with the diverse research fields of our centre.

However, all children agreed that the holiday course was loads of fun. Many of them especially liked the experimental part. But, maybe that is not so very surprising with Hereon children.

What does the Schools lab do during the (summer) holidays? 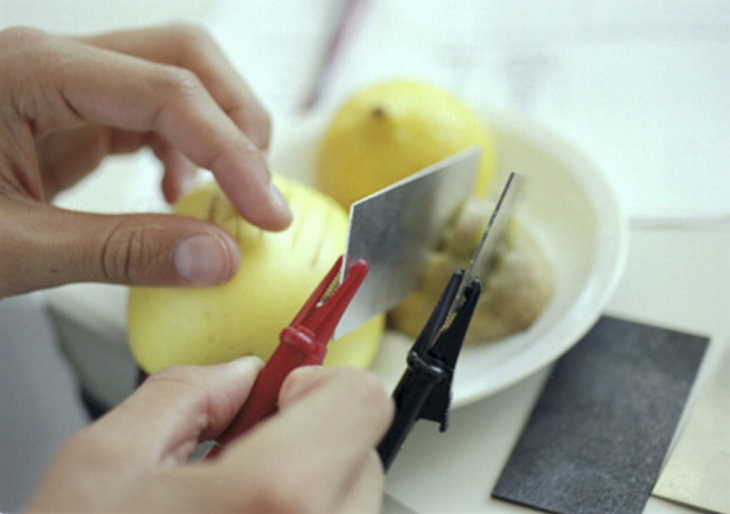 During the first two weeks of summer vacation children from age 7 to 14 got the opportunity to perform one day experiments at the students lab. They could do their own research, but they also learned about the work at Hereon. The courses were part of our holiday programme.

This summer, five associations of surrounding villages took up the offer. Almost 100 young participants experimented on the topic of electricity on seven days. The young researchers got to know different energy converters and could also try them out. They tested which materials conduct and isolate current. Electricity circuits were built, circuit sketches were created and in the end every child could hear the tension of a potato.

"I will definitely be back next year!" promised many children when they got on the bus home. The feedback from the children and group leaders was very positive. It is also gratifying that children always asked what they need to do to become scientists later.

After the holiday programme, the schools laboratory goes on a cruise. For this, boxes were already packed, concepts were written and instructions were prepared. On the "Mein Schiff 4" from TUI Cruises, the schools lab offers five workshops for children from 07.08.-21.08. during the cruise. From the 28th of August on, pupils and teachers workshops will take place as usual.

How it all began
When the Quantum Leap was founded in 2002, it was one of the first school labs in the Helmholtz Association. It was initiated by Prof. Günter von Sengbusch, the former managing director of the GKSS. It all started with a laboratory in which experiments on the fuel cell were carried out. The school laboratory has been designed to not resemble a classroom. Pupils should have the feeling of working in a "real" research lab for one day. Also, the lab was fully equipped with laptops, which was a special feature at that time. In all the years, they have only promoted the student lab once: 400 schools were invited to the opening. Since then the lab has been occupied almost every day. 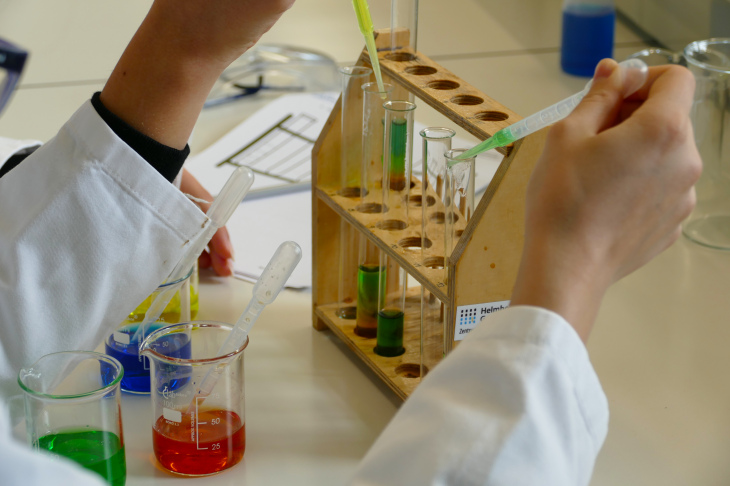 On the first day the main topic was “Focusing on water”. Photo: Hereon/Gesa Seidel

In the first years, "Water Analysis" and "Renewable Energies" (hydrogen and fuel cell) were the two main topics. Meanwhile there is also the topic "Salt of the Seas" from the area of coastal research. It was designed by the delegated teacher Birte Cirotzki and supported by scientists from the Institute of Coastal Research and has so far been successfully carried out several times. In September 2016, the spectrum was expanded to include "Insights into Nanotechnology". "The Nanoworld is so exciting and diverse, we just had to offer such a topic in the school lab," says Natalya Grohn, co-worker in the Quantum Leap. She took the lead to established the topic in the Quantum Leap. 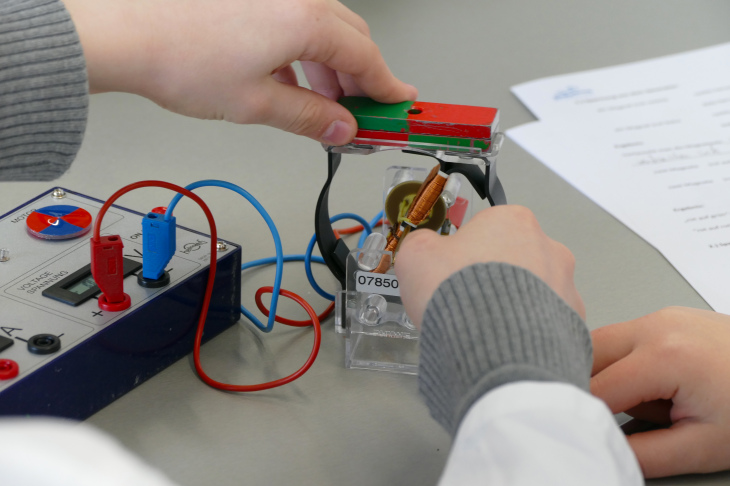 "Focusing on Electricity" was the theme of the second Anniversary Young Researcher Day. Photo: Hereon/Gesa Seidel

"We want to show the children that science is dynamic. At school, many still think there is only one correct answer and all this has already been explored, " says Ümmü Gülsüm Öztürk, co-worker at the school laboratory. Sabine Mendach, head of the lab, adds: "With our experiments, we want to arouse the spirit of research and show that sometimes only models can help understand reality." The experiments have changed over time – just like research. If methanol fuel cells were previously used, metal hydride storage are used today in the school laboratory – as well as at the Institute for Materials Research.